Woman, 68, gets parasitic worms in her EYE ‘after running through a swarm of flies’ on a trail in California’s Carmel Valley

A woman who ran into swarm of flies while she was out jogging ended up with parasitic worms living in her eye.

The 68-year-old started to feel irritation in her right eye in March 2018, a month after running a trail in California’s Carmel Valley.

She tried to rinse out her eye with water and pulled out two worms, which measured around half an inch long (1.3cm).

The woman, who has not been identified, then sought help from a specialist doctor, who retrieved a third worm and sent it for tests.

Centers for Disease Control and Prevention (CDC) experts revealed the worms were Thelazia gulosa, which had only ever been recorded in a human once before. 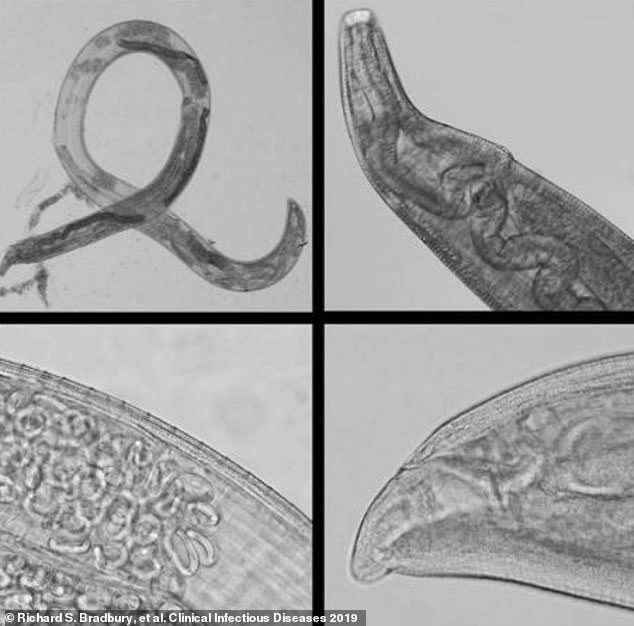 A total of four worms identified as Thelazia gulosa were pulled from the woman’s eye (pictured, microscope images of the creatures)

The woman lives in Nebraska but spends her winters in California, Live Science reported.

Carmel Valley is located about 13miles (21km) from the coast – just east of Monterey and south of Salinas.

The day after the woman pulled the two worms from her eye she went to see a specialist doctor, who discovered a third creature.

Dr Richard Bradbury kept the third worm, preserved it and sent it to the CDC – the US health authority – for testing.

It was found to be a species called Thelazia gulosa, which is found across Asia, Europe, North America and Australia.

Doctors don’t know for sure how the woman was infected by the creature, but their larvae normally live in the eyes of animals such as dogs, cows and horses.

The larvae are eaten by flies, but survive this, and are transferred to other animals – or potentially people – which the infected flies land on.

WHAT IS AN EYE PARASITE?

A parasite is an organism which lives inside another living organism, and depends on other creatures in order to stay alive. They often harm their host in the process.

Many different parasites affect humans and they can transmit deadly diseases such as malaria and trichomoniasis, which can be passed on during sex.

Around three quarters of parasites are so small they’re not visible to the human eye. Some, such as worms, may grow much larger.

Examples of parasites which may live in humans include tapeworms and roundworm, which both live in the digestive tract.

Parasitic eye infections can cause symptoms such as pain, inflammation, watery eyes, blurred vision, sensitivity to light, itching and even blindness.

Acanthamoeba keratitis is one of the main infections of they eye, caused by the parasite acanthamoeba. The organism is found within freshwater and marine environments worldwide.

It’s transmitted through direct contact with the parasite and the cornea of your eye. Those with poor contant lens care are at a higher risk.

Some parasites enter the body through the mouth or skin, and then travel to the eye.

For example, toxocariasis is a rare infection caused by roundworm parasites caught from handling soil or sand contaminated with infected animal faeces.

When it infects the eyes, it’s referred to as ocular toxoplasmosis. It can cause blurred vision and eye pain. But cases are very rare.

Symptoms of infection may include swelling, pain looking at light, excessively watery eyes or conjunctivitis.

The woman revealed that she spent time outdoors running and distinctly remembered a particular run in Carmel Valley in February 2018.

As she rounded a corner of a trail, she ran into a swarm of flies and ‘swatted the flies from her face and spat them out of her mouth’.

Her doctor told her to keep flushing her eye out with distilled water to remove any more worms and gave her a topical medication to prevent infection.

When she returned to Nebraska, she still felt something was niggling in her eye but, despite several attempts, medics were unable to find any more worms.

The woman eventually pulled a fourth and final worm from her eye in her home, the report in the journal Clinical Infectious Diseases revealed.

The authors said humans may be ‘suitable hosts’ for the reproduction of T. gulosa because they saw eggs developing in the woman’s eye.

Abbey Beckley, 26, from Oregon, was the first known person to have had T. gulosa worms in her eye.

Three years ago, she felt something behind her eyelid while on a hike near Portland and initially thought it was a stray eyelash.

A total of 14 T. gulosa worms, all less than half an inch long, were extracted from Ms Beckley’s eye over the course of 20 days.

Having a second human case of T. gulosa occur within two years of the first case ‘suggest[s] this may represent an emerging zoonotic disease in the US,’ the study authors wrote.

A zoonotic disease is one that jumps from animals to people, with children under five, adults over 65, and those with compromised immune systems being most at risk.

If the worms remain in a person’s eye for a prolonged time, they can cause corneal scarring and even blindness, according to the researchers.

There have been 10 known incidences of humans being infected with a Thelazia worm in North America, but none of those cases involved the species gulosa.