A woman has had her hip replaced at 28 after years of pain and struggling to get out of bed without help.

Loretta Hood, from Leicester, was initially told she was too young, despite doctors being able to see the extent of damage to the bone.

Miss Hood was born with a deformed hip, which was discovered aged nine months when her parents noticed she was dragging her leg behind her.

After having surgery at the age of one to place the ball of her hip into the socket, she didn’t have pain for 12 years.

But by the age of 20, when her knee started to lock in place and dislocate, she was diagnosed with early arthritis.

The pressure on her hip caused it to wear down, causing the agonising condition that is most common in those aged over 65.

After insisting the hip replacement would change her life, it took place in November 2018, and now Miss Hood feels like a normal woman in her 20s. 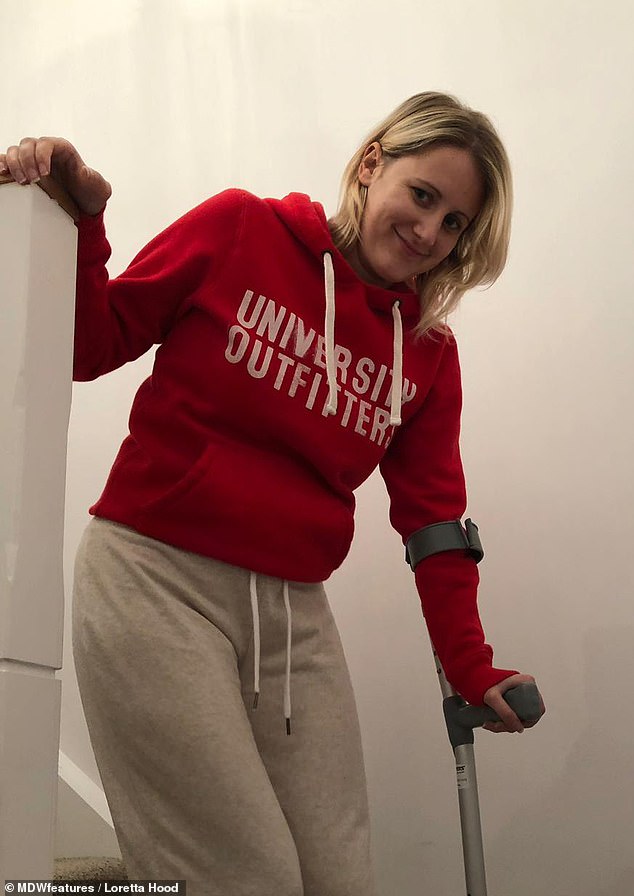 Loretta Hood had her hip replaced at the age of 28 after years of pain and struggling to get out of bed without help. Pictured after her surgery at her home in Leicester 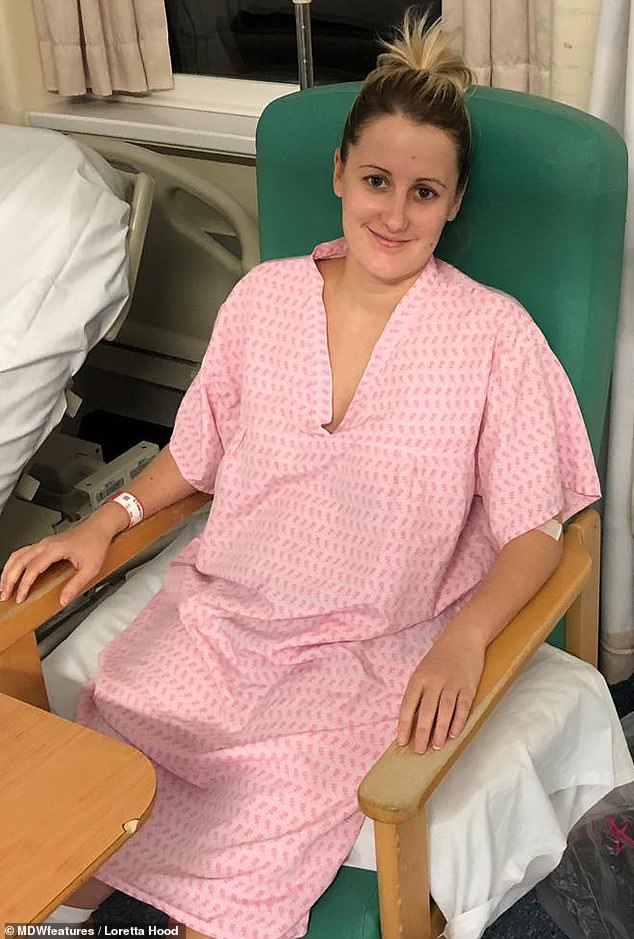 Miss Hood was initially told she was too young to have her hip replaced despite doctors seeing the amount of damage present in her hip. Pictured, in hospital 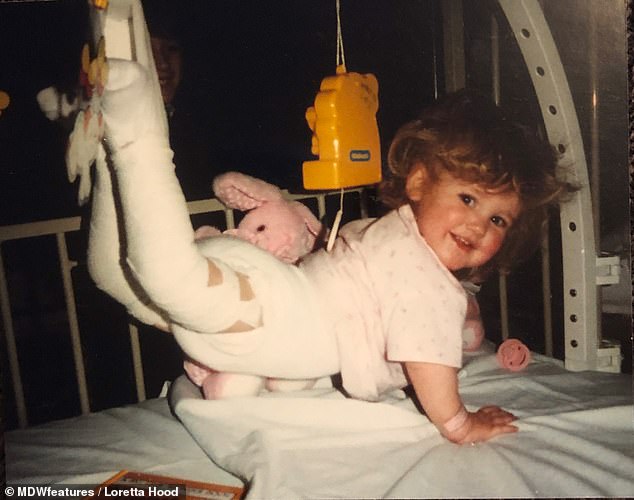 Miss Hood was diagnosed with congenital dislocation of the left hip, caused by the ball and socket not forming correctly. She was put in traction, which means her legs were raised, for three weeks before having surgery at the age of one 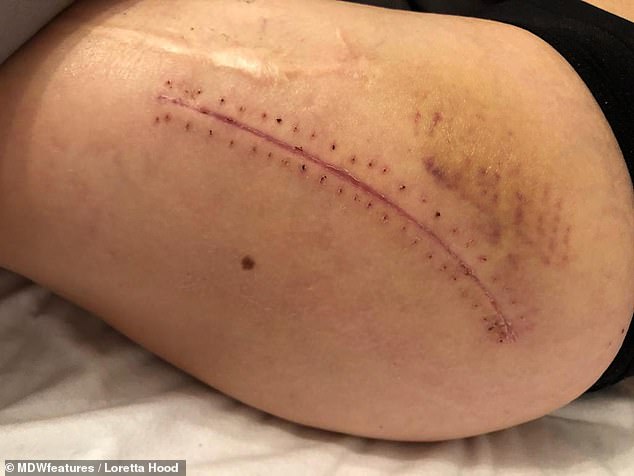 After insisting the hip replacement would change her life, it took place in November 2018. Pictured, after the staples were taken out

Miss Hood, a technical services customer coordinator, said: ‘Regardless of age, it’s important to push for surgery when you feel you need it.

‘To be pain-free feels incredible and it’s only now that that I really understand the extent of what I was putting up with.’

When she was a baby, Miss Hood’s parents started to think something was wrong with her leg as she showed signs of pain and would drag her left leg behind her while learning to walk.

Miss Hood was diagnosed with congenital dislocation of the left hip, caused by developmental dysplasia of the hip (DDH), where the ball and socket of the hip don’t form correctly.

Upon referral to an orthopaedics department, Miss Hood was put in traction, meaning her legs were hung up to keep them apart.

Traction is to relieve pain and make surgery, which she had three weeks later, easier.

She said: ‘I had hip reduction surgery to place the ball back into the socket, before another operation where they broke the bones to put metal plates in the leg.

‘After a year, the metal plates were removed, and I was left with two large scars down my leg. For many years after, I didn’t experience any further issues with my left hip or my leg.’ 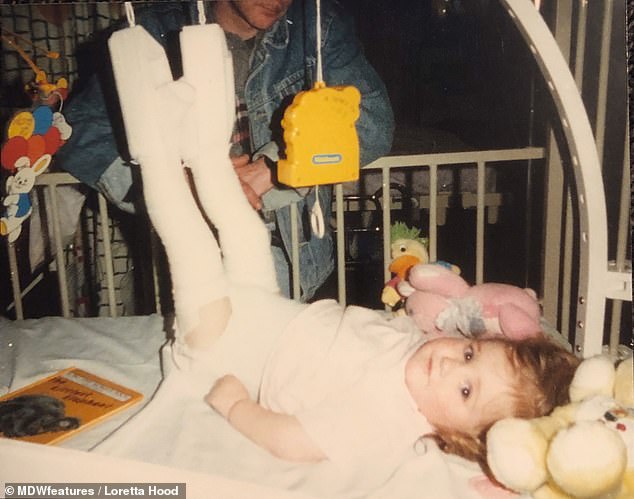 Miss Hood’s parents started to think something was wrong with her leg as she showed signs of pain and would drag her left leg behind her while learning to walk. Pictured in traction 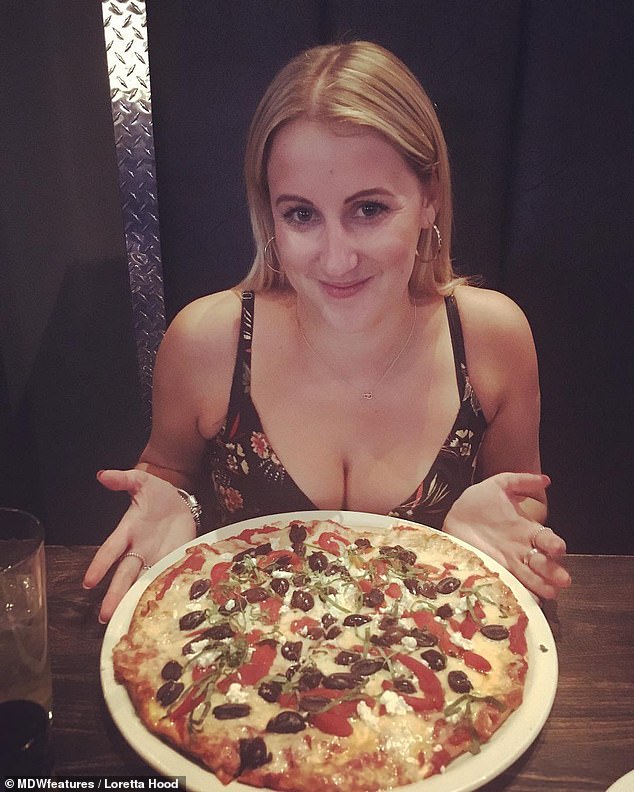 After having surgery at the age of one to place the ball into the socket, Miss Hood didn’t have pain for 12 years. Pictured recently 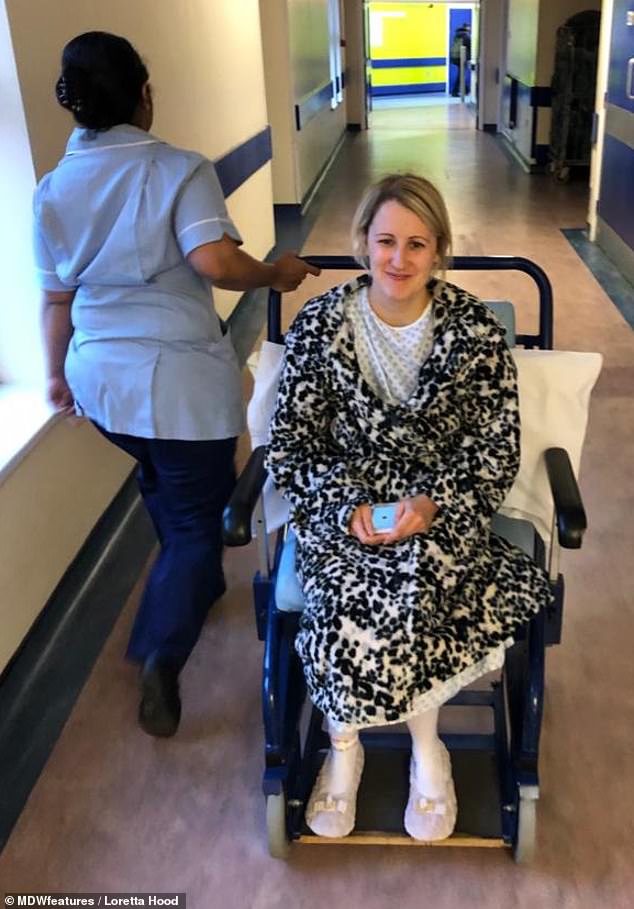 Miss Hood has had various procedures over the years to try and treat her pain. She was diagnosed with arthritis at the age of 20. Pictured in hospital, unknown date

CAN YOU BE TOO YOUNG FOR A HIP REPLACEMENT?

Hip and knee replacements are most common in the age between 70 and 79 most commonly due to wear and tear, condition such as osteoarthritis and falls.

Adults of any age can have one, the NHS says. But because it is a major surgery, it is normally only recommended if other treatments, such as physiotherapy or steroid injections, haven’t helped reduce pain or improve mobility.

The artificial joints are only built to last for around 15 years, with multiple replacements becoming progressively more difficult and less successful.

The total number of hip replacements in under 30s in 2017 was 185, representing under one per cent of patients, according to the National Joint Registry.

For 12 years, Miss Hood didn’t experience any further issues and was able to start dancing at five years old.

But then, in 2004, Miss Hood began experiencing a ‘clicky knee’. Her knee would often dislocate, and her leg locked if she sat in one position for too long.

She said: ‘I didn’t realise it was connected to my hip at the time. My knee dislocated quite frequently, but after the third time, the hospital showed me how to push my own knee back in.

‘It happened repeatedly before I was referred back to orthopaedics. I had to give up dancing because this was putting more strain on the hip and in turn the left leg and knee.

‘I was experiencing deep pains in the bone, sharp twinges, arthritic pain and clicking.

‘My leg would often get stuck, and if I was on my own, I would have to try and crawl out of the position I was in.’

In 2011, Miss Hood was diagnosed with arthritis at 20, despite initially being told to expect this diagnosis in her forties.

Arthritis most often develops in adults who are in their mid-40s or older. But, in the UK, about 15,000 children and young people are affected. The most common form, juvenile arthritis, affects nearly 300,000 children in the US. DDH can lead to arthritis. 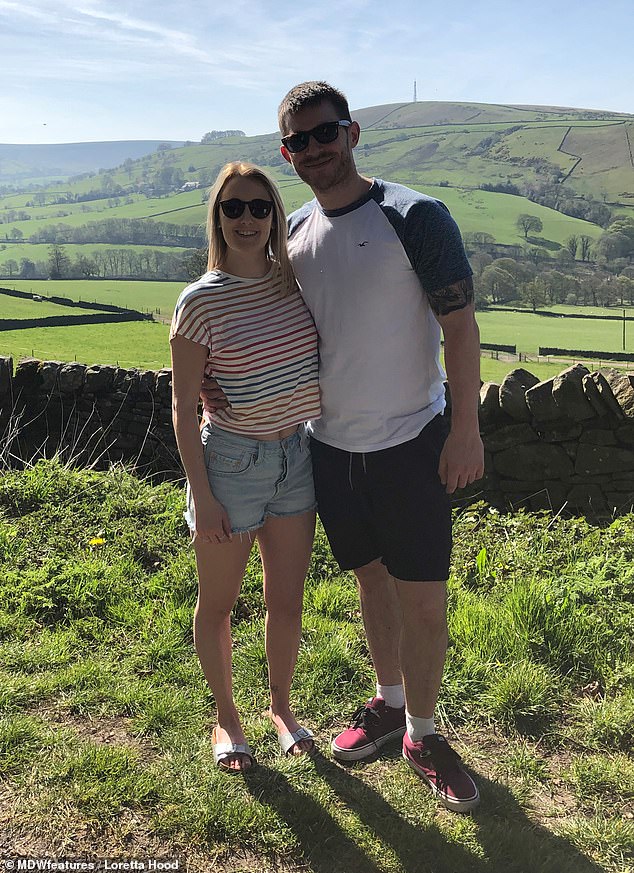 Miss Hood said by 2017, her boyfriend, pictured, who has not been named, was helping her get out of bed and the bath 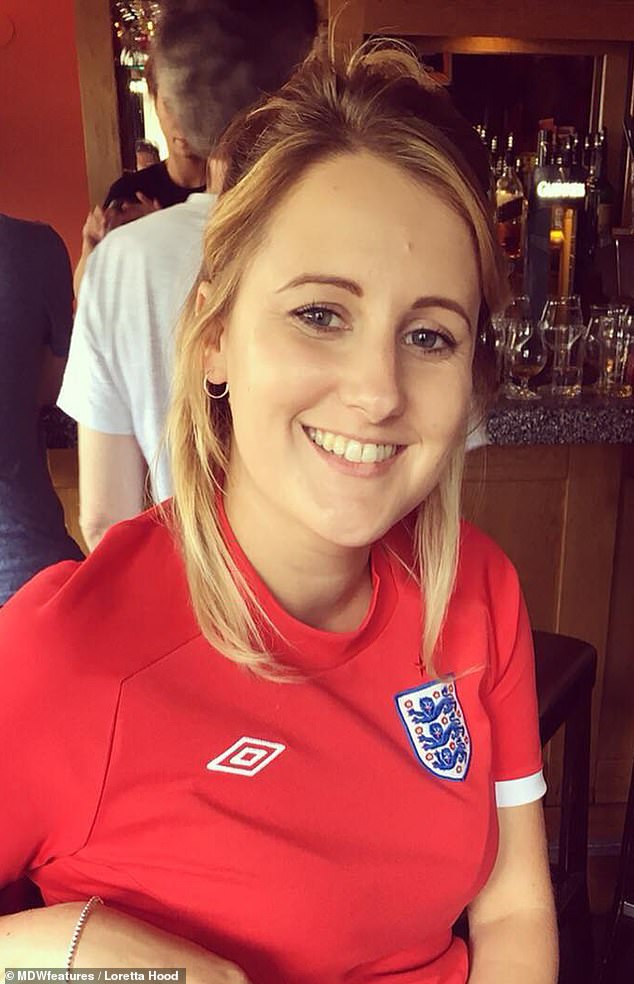 Miss Loretta, pictured recently, said: ‘I got so used to the pain that I was living with daily. It meant I couldn’t do normal things like long walks, running, skiing or go on nights out’ 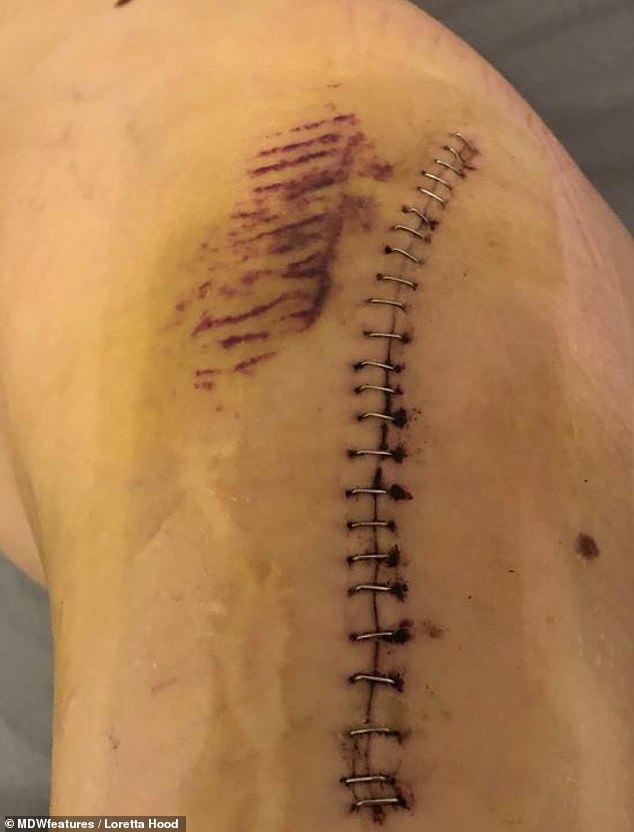 Miss Hood had experienced deep pains in the bone of her knee, as well as sharp twinges and clicking, from 2004. This put more pressure on her hip, which was operated on last year

WHAT IS A HIP REPLACEMENT?

People are usually referred for a hip replacement when their natural hip joint – where the thigh bone connects to the pelvis – has worn away or become damaged and is causing pain or disability.

Most commonly this happens as a result of arthritis, in which cartilage around the joint is weakened or damaged and the bones grind against each other.

Hip replacement surgery involves sawing off the head of the thigh bone – the femur – and the hip socket (the acetabulum) and replacing them with a metal or ceramic ball and socket connected to the skeleton.

The operation usually takes around 60 to 90 minutes and involves spending a few days in hospital.

Five years later, as the hip slowly wore down, Miss Hood needed help to get out of bed as she couldn’t get herself up.

She said: ‘The [hip] joint was becoming worn. I had my first steroid injection in the hip which gave me about 18 months of movement and decreased the pain, but it slowly crept back.

‘I got so used to the pain that I was living with daily. It meant I couldn’t do normal things like long walks, running, skiing or go on nights out. My boyfriend would have to help me out of bed and out of the bath which wasn’t ideal.

‘I couldn’t fulfil everyday activities as I would often get stuck in positions again with my hip locking. I had to have another injection but that wore off even quicker.’

Miss Hood had another surgery in 2017, called hip arthroscopy, to remove the hip from its socket to assess the extent of the damage.

Miss Hood said: ‘The inner joint was damaged and wearing away and there were signs of arthritis.

‘Scans couldn’t show the extent of this, so it was quite eye opening to understand the reason behind the extreme pain I was feeling. The surgeon confirmed that the hip was far too damaged, and the only solution was a hip replacement.’

Unfortunately, doctors said that Miss Hood was ‘too young’ for a hip replacement, despite the recommendation. 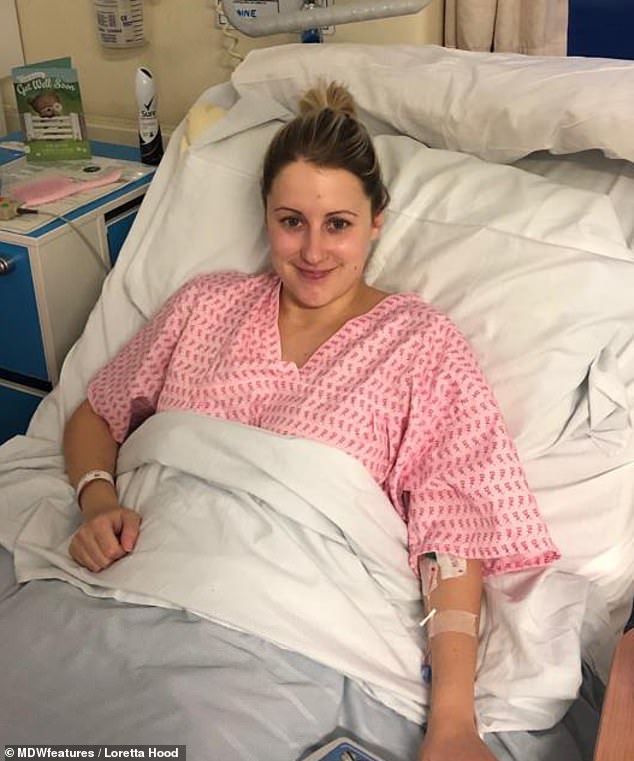 Surgery in 2017 to assess the damage in her hip led surgeons to recommend Miss Hood had a hip replacement. But she was deemed ‘too young’ to start with. Pictured in hospital 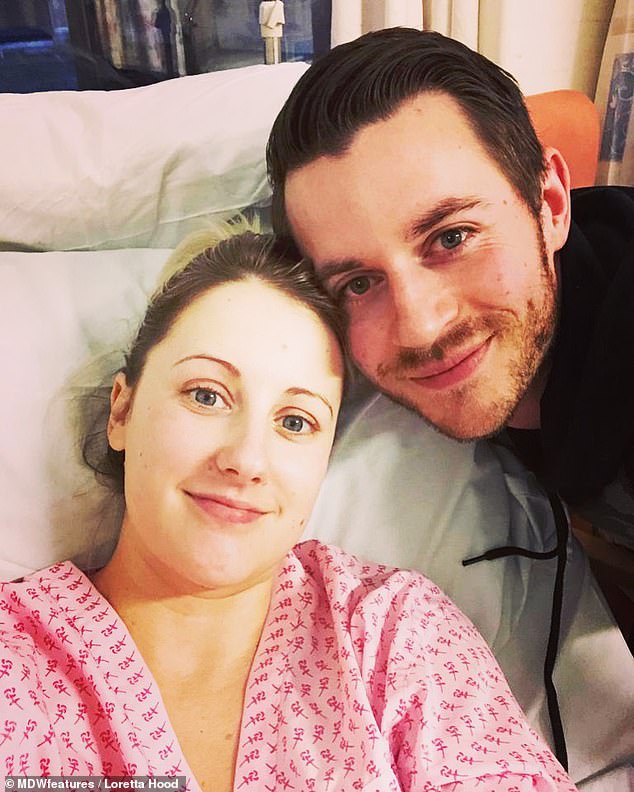 Miss Hood said: ‘I felt angry and defeated. It was so frustrating that the expert had been inside my leg and seen the extent of the damage, and said a hip replacement was the only solution, but he was dismissed by others because of my age’. Pictured with her boyfriend in hospital 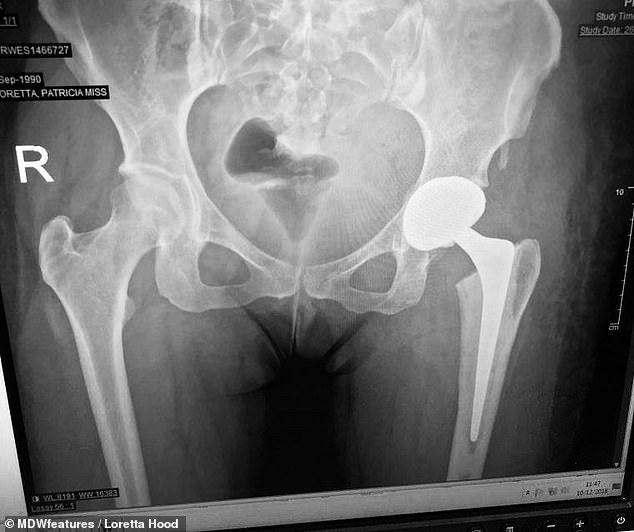 After pushing for surgery due to her constant pain, Miss Hood had a left hip replacement on November 23, 2018, at just 28. Pictured, the X-ray showing the replacement on the right 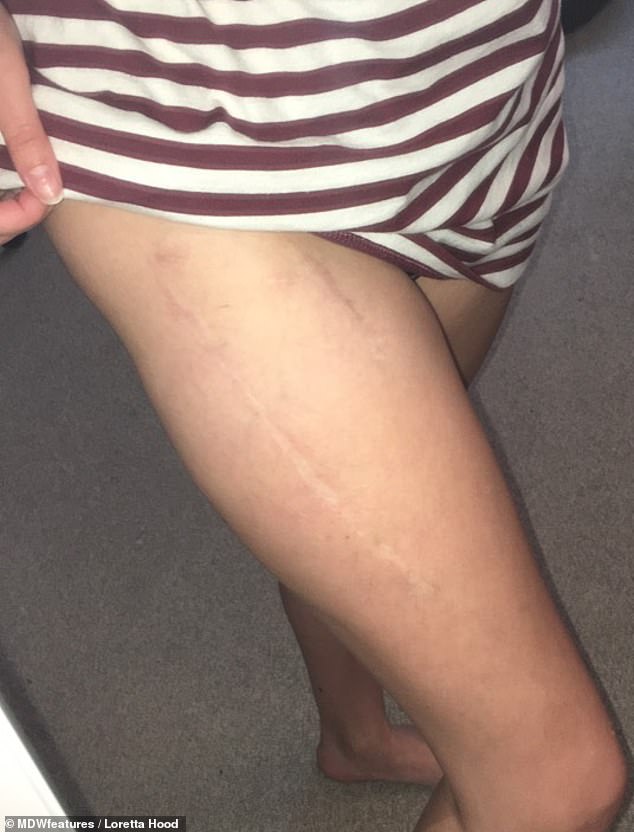 Miss Hood had 12 weeks of recovery in which time she couldn’t shower, bend, stretch, or go to the toilet without ‘crying in pain’. Pictured, the healed scar

Miss Hood said: ‘I was sent back to orthopaedics and they wanted to wait before offering me a hip replacement, deeming me “too young”.

‘I was adamant that I wanted the surgery, especially since the specialist said it was my only option.

‘I felt angry and defeated. It was so frustrating that the expert had been inside my leg and seen the extent of the damage, and said a hip replacement was the only solution, but he was dismissed by others because of my age.

‘I was given another steroid injection in December 2017, but it had no effect.

‘Then, they finally referred me to a new specialist, who specialised in young adult hip replacements, and he agreed that I needed surgery.’

After pushing for surgery due to her constant pain, Miss Hood had a left hip replacement on November 23, 2018, at just 28.

This was followed by a gruelling 12-week recovery process without showering, bending or stretching. After four months, she was able to get back in the gym gradually.

She said: ‘I’m no longer in pain like before. It’s still a new hip and it will take some time to settle in and there are still certain restrictions, but ultimately, to be pain free is amazing.

‘Recovery was painful, and I couldn’t go to the toilet on my own without crying in pain. I had to have a special toilet seat fitted in my bathroom and we had to adapt the sofa as I couldn’t sit on any seating less than 17.5 inches from the ground, to avoid the new joint dislocating.

‘I couldn’t shower, I had to wear surgical stockings for six weeks and there was the traumatic experience of having the 24 staples out.

‘After eight weeks, it started to turn around once the pain started to subside. Since then, I’ve made great progress as I’ve been determined to get fitter and get back to normal.’

Miss Hood hopes that she can encourage others not to be refuted by professionals if they feel they aren’t being heard.

She said: ‘I’m so happy I had the operation when I did, it has absolutely changed my life. I would recommend this to anybody who is younger and needs the surgery.’ 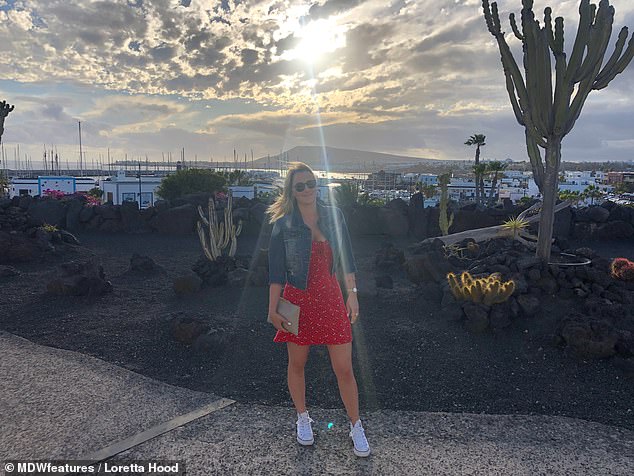 Miss Hood, pictured recently, hopes that she can encourage others not to be refuted by professionals if they feel they aren’t being heard after having her life turned around by surgery