You CAN dare to go bare: Study finds no link between pubic hair grooming and STIs, debunking ‘ladyscaping’ myth

You can go ahead and wax, trim, shave, manscape or tend your lady garden to your heart’s content without worrying that your grooming will raise your STD risks, new research says.

Several years ago, the findings of one surprising study backed up the urban legend that the more ‘extreme’ women’s pubic hair grooming is, the more prone to sexually transmitted infections they would be.

A new wave of feminism has brought the ‘bush’ back shortly following the publication of the worrisome research.

But Ohio State University research has debunked the myth that there’s any difference in STD risks whether you go bare or leave it all there. 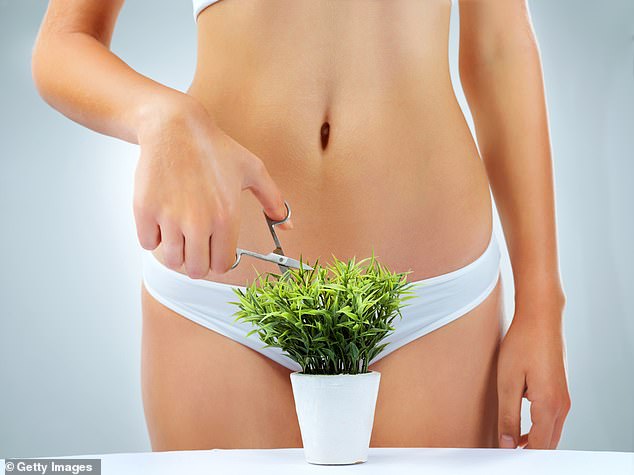 Women who wax, trim or shave off all their pubic hair frequently are at no greater risk of STIs than those with less ‘extreme’ grooming practices, a new study finds

For nearly as long as history has been recorded, women have been removing their pubes.

The ancient Greeks did it. The Romans did it. The Egyptians did it – and removed hair from just about every other inch of their bodies.

Social attitudes toward and styles of grooming down south vary from time period to time period and region to region.

In South Korea, more thick, dark pubic hair is seen as a sign of fertility, and is something so desired there are even transplants offered.

These days, it seems mostly a matter of preference.

But a 2016 study suggested it might be a matter of health.

That study, conducted by scientists at the University of California, San Francisco, found people they defined as ‘extreme groomers’ – who removed all of their pubic hair more than 11 times a year – were at higher risk for herpes, syphilis and HPV.

In fact, that study, which used self-reported data on both grooming and STD diagnoses, found they were four times more at-risk than those who groomed frequently, just not as frequently.

But Jamie Luster, a former Ohio State graduate student and lead author of the study, and her team were incredulous of that finding.

‘Biologically, [some have] kind of believe that grooming could cause injury or micro-trauma and all for pathogens to enter the body more easily,’ she told DailyMail.com

Other theories have suggested that shared grooming tools could allow STIs to be transferred.

But Luster and her colleagues suspected that something else was at play.

‘We thought that possibly that association could be due to a different factor that impact both grooming and STI risk,’ she said.

‘For example: people who groom more might have more sex and a higher risk of STI.’

She and her co-authors recruited 214 female college students to help them find out, surveying them about how often they waxed, shaved or trimmed – or didn’t.

The women all agreed to give the research team access to their lab results from STI screening tests.

About 10 percent of the women had positive lab results – but their grooming had nothing to do with it.

No matter how they defined ‘extreme grooming,’ Jamie and her team could find no link between how college women wore their pubic hair and their STI risks.

She says that grooming tools need to be used carefully to prevent injury but, aside from that, pubes appear to be about preference, not protection.