Would YOU pay £30,000 for a smile like these? Here five women explain why they splashed out on a shiny new set of pearly whites

What would you pay for the perfect smile? Judy Murray recently confessed that she spent £30,000 on 15 months of cosmetic dental treatment to give her a shiny set of pearly whites. The 58-year-old tennis coach, mother to Wimbledon champions Andy and Jamie, had her smile overhaul after becoming sick of comments that she always looked serious. She admitted she had always been scared of the dentist and reluctant to smile as she hadn’t looked after her teeth. ‘I made the decision to do something about it,’ she said. ‘It’s one of the best things I ever did.’

I was always self-conscious about my teeth. So I taught myself how to smile without showing them and, every time I laughed, I held my hand over my mouth.

When I was a teenager, one of my front teeth was snapped in half during a hockey game. I had it repaired but, by my early 20s, it was stained and some of my other teeth were discoloured.

When I was 23, I read about the London Centre For Cosmetic Dentistry in Vogue magazine and, knowing how much my teeth bothered me, my parents offered to pay to have them whitened.

But dentist Dr Mervyn Druian explained my teeth were also out of alignment and advised that veneers would be best for me. 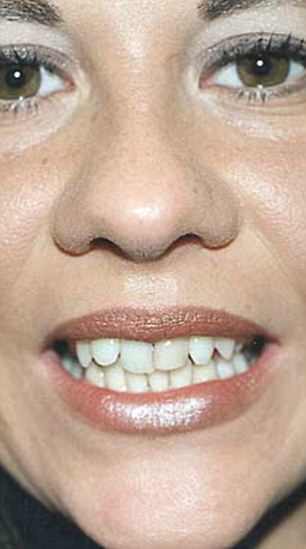 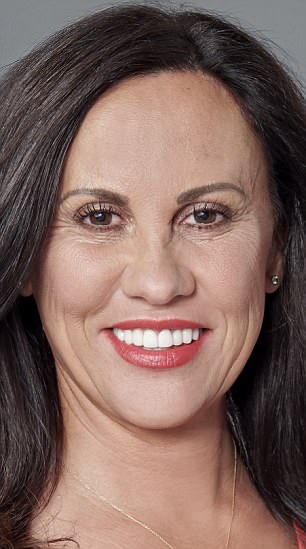 Nina Tetra, 42, decided to have her veneers replaced last year

I did some research and ended up taking his advice. First, I had five hour-long hygiene appointments to make sure my gums were in good health and have a damaged nerve removed.

Then, after taking impressions of my teeth, I had 24 veneers fitted — a temporary set first, to ensure the best fit, and the permanent set two weeks later.

I’ve also got three dental bridges and three gold inlays and, after deciding to retrain as a dental nurse, last year I had my veneers redone.

There was nothing wrong with them, but porcelains are always advancing and I wanted something a bit brighter and fuller.

When it was first done, I actually had to look in the mirror to train myself to smile.

I totally understand why Judy Murray says it’s one of the best things she’s ever done.

Dentist Dr Mervyn Druian says: Nina was hugely nervous, but a great patient, and the result made such a difference.

She decided to have her veneers replaced last year. Techniques have changed over the years and the porcelains are absolutely brilliant — the lustre is great and they last much longer.

I look at them lasting 15 to 20 years, but there’s no reason why they shouldn’t last longer.

Alyson Stratford-Wood, 62, a retired dancer, is a mother of two who lives in Lincoln and London. Her treatment: Braces, gum lift, bone graft, veneers, crowns and an implant.

I think it was the ageing process more than anything that made me decide to have it done — I just wanted to look the best I could.

I had my own teeth and had looked after them, but not the way children are encouraged to today. I’d been back and forth to the dentist over the years and had the odd crown and fillings — they were all a bit higgledy-piggledy.

Then, a few years ago, people kept talking about the ‘Hollywood smile’ and I thought: ‘I want that.’

I saw Dr Tim Bradstock-Smith at The London Smile Clinic and had veneers top and bottom, but not too white — I wanted them to look natural. 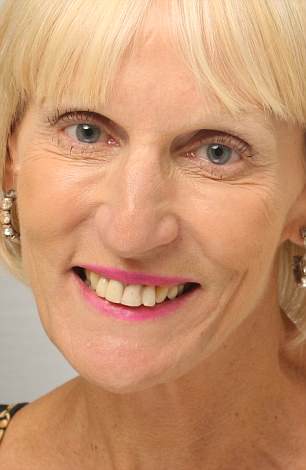 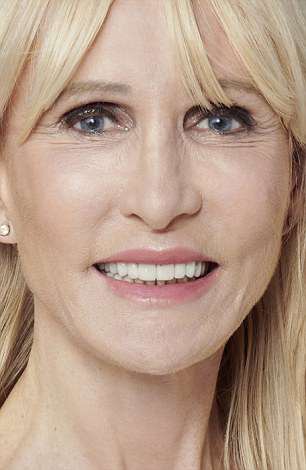 It was done in four slots of four hours while I watched films on goggles — Some Like It Hot, The Seven Year Itch and Breakfast At Tiffany’s. I wasn’t too nervous — I just wanted to look nice and was determined my life was going to change.

I knew how much it would cost, but I’ve spent a lifetime working and thought: ‘Now I’m going to jolly well enjoy it.’

My confidence has gone through the roof since I had the work done. People notice my smile. It was worth it.

Dentist Dr Tim Bradstock-Smith says: Alyson had what we call a full smile makeover — alignment and veneers, which is a more long-term, healthier approach. Veneers involve removing a thin layer from the front of the tooth and replacing it with porcelain.

She needed one front tooth removing, a bone graft and a gum lift. Then she had veneers and crowns — 13 on top and 13 on the bottom — with a couple of her own teeth untouched.

When it comes to the colour of the teeth, we do computer imaging with the patient’s own face, so we can get a good idea of what sort of thing they are expecting.

In all, it took eight months from when Alyson first came to us to finish.

Maria Keogh, 56, is a site manager in the utilities industry with two grown-up children. She lives with her partner in West London. Her treatment: Dental implants and bridges with extensive preparatory work.

In my childhood, I remember having great teeth, but I had an accident in my 20s that left me with missing and damaged teeth.

I hated smiling — they just didn’t look nice and it made me feel very self-conscious.

The older I got, the more I wanted to go down the implant route. I didn’t just want to patch up my existing teeth, I wanted new ones. Unfortunately, my first experience three-and- a-half years ago went horribly wrong.

I don’t want to go into detail, but I was in pain, I couldn’t eat and I couldn’t move my tongue. It had to be fixed. 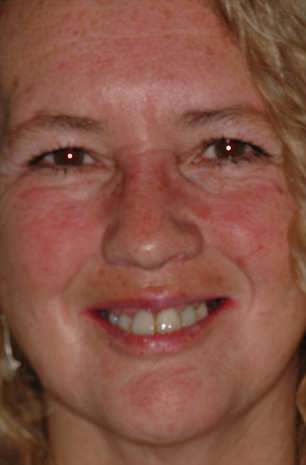 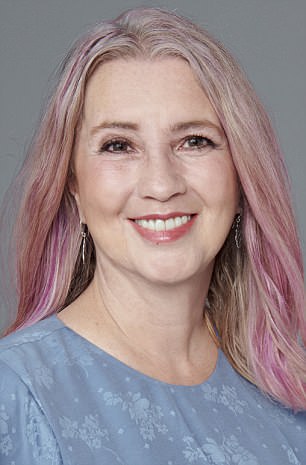 My sister had a friend who had previously been to Dr Anoop Maini at Aqua Dental Clinic, in Pinner, Middlesex. The first time I went to see him I was petrified, but he put me at ease.

Scans showed that I had a terrible infection in my jawbone, so I had to have antibiotics and all the debris from the failed implants had to be removed.

The implants were all done in a day — I was sedated, but conscious.

The finished article was incredible. I kept thinking they looked so white!

I had to take out a loan and use savings, but it’s the best thing I’ve ever done for myself. It’s opened up my life.

I work with lots of men and one of the guys has even had his done.

Dentist Dr Anoop Maini says: Maria was in a lot of discomfort when she came to see us. She’d had implants that hadn’t worked, so her teeth were painful and she couldn’t eat or even move her mouth.

Her jaws were full of infection, so the first thing we had to do was deal with that. She needed IV antibiotics and to have all the infection cleaned.

Her teeth needed removing, so the options were removable dentures or fixed dental bridges supported by implants. She chose the latter.

She had a temporary bridge for six months, then the final bridges.

It really did change her life.

Carly Taylor, 29, is a mother of two who lives with husband Adam, 39, in Lutterworth, Leicestershire. Her treatment: Fixed braces, upper and lower veneers, gum lift and fillings.

As a child, I did look after my teeth. If I had sweets, I would make them last — but it felt like every time I went to the dentist, I had a filling.

My bottom teeth crossed over and they were chipped from where I’d had an accident dry slope skiing.

It was another school mum who recommended The London Smile Clinic. 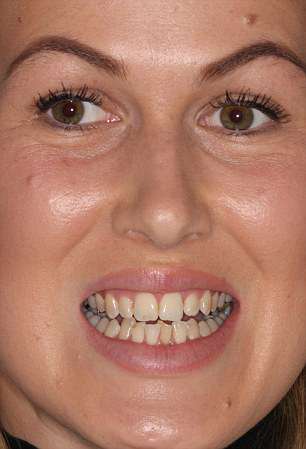 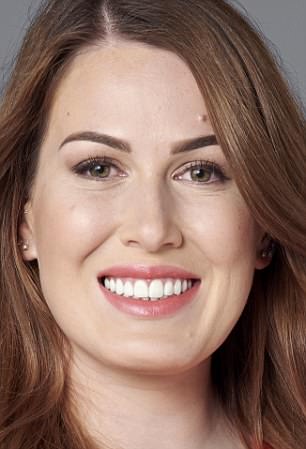 Carly Taylor, 29, had treatment for her gums because one side was slightly lower than the other

It took me a year, but I realised it was the best thing and I didn’t want my children to think there was anything wrong with braces.

I had five fillings redone, some extractions and then wore braces for seven months.

Then I had treatment for my gums because one side was slightly lower than the other and, finally, I had my veneers fitted at the end of 2016.

I was fortunate we could afford it. It has made a huge difference.

Before, I would hold my hand over my mouth when I laughed — now, I’m always showing my teeth off.

Dentist dr Tim Bradstock-Smith says: Doing the alignment (braces) first meant that we could keep the maximum amount of natural teeth — veneers can be as little as 0.3 mm thick, which means removing only a very thin layer of the natural tooth.

When someone has orthodontic work done first, the cost does add up, but this is very much the approach now.

As a child, my teeth were beautiful but, when I was aged 18, I fell on a concrete floor, breaking several of them and dislocating my jaw.

I did have treatment on the NHS, but it was painful and I developed a fear of the dentist. I was so scared that I preferred to have broken teeth.

Eventually, my teeth were in such bad condition that I had to have several removed and false ones fitted — but the removable plate they were attached to was damaging the teeth around it.

I was so scared, I would cry all the way to my appointments and walk round the chair before I could sit down.

I was self-conscious and so terrified my plate would fall out that I carried Fixodent [a denture adhesive] in my bag. 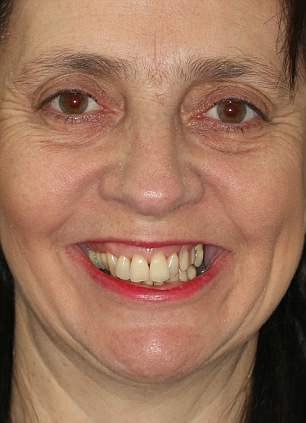 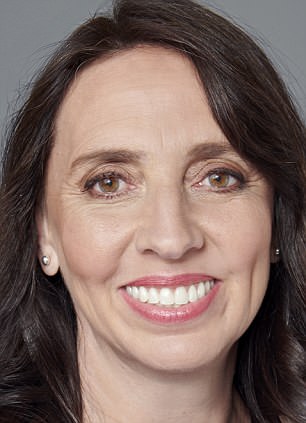 It had always been my dream to have a new set of teeth, even dentures. Then someone recommended Dr Anthony Zybutz at TDC Implant Centres in London.

At the initial consultation, I was still crying, but he made me feel relaxed and gave me a couple of options — one of which was having all of my teeth replaced with implants. I didn’t want months of treatment, so decided on all or nothing. It wasn’t a small decision, but we had the money saved.

Now, I smile all the time. I’ve got my confidence back. I just wish I’d done it years ago.

Dentist Dr Anthony Zybutz says: Helen’s teeth were in such bad shape that she couldn’t eat properly. She had her remaining teeth out.

On the same day, under sedation, she had dental implants with titanium foundations fitted and temporary teeth fitted to the implants .

The gum shrinks when teeth are removed so, after three months, Helen came back and the temporary set was replaced with a second set of teeth made of a composite material.