Mucolipidosis IV debilitates afflicted children’s nervous systems in their first year of life, steals their eyesight in their teens and takes their lives in their twenties, and so far, there is no therapy to fight it. Now, lab tests using an existing prescription drug have shown initial hope for a future treatment.

Fingolimod is used to treat a form of multiple sclerosis and is already FDA-approved. Researchers at the Georgia Institute of Technology, and at the Massachusetts General Hospital Research Institute have led successful testing of fingolimod, in vitro, i.e. on lab cultures, in cells originating from the brains of mice genetically augmented to mimic mucolipidosis IV (MLIV).

The next step will be tests in living mice, and researchers are hopeful that continued research progress may lead to a quicker than usual approval for human clinical drug trials. Fingolimod has not been tested on human MLIV cells and is not yet prescribed to treat MLIV.

The researchers published their study in the latest edition of the journal Human Molecular Genetics. Their work was funded by the ML4 Foundation.

Mucolipidosis IV is a rare hereditary disease with a cruelty that can rival cerebral palsy’s. MLIV strikes very early in life and goes from bad to worse.

“Around the age of 9 months, you see cognitive deficits,” said Levi Wood, an assistant professor in Georgia Tech’s School of Mechanical Engineering. Wood’s research focuses on neurological diseases. “The children never learn to speak, and hardly at all to walk.”

“When they go blind, it changes everything so badly, because the children stop recognizing faces, including their parents’,” said Yulia Grishchuk, a junior faculty member at Mass General and Harvard Medical School. She co-led the study with Wood.

MLIV is caused by a single mutated gene.

“It disrupts the lysosome (a cell organelle), which is responsible for recycling waste, and this causes it to pile up in the cell,” Grishchuk said. “Junk accumulates in all the cells of the body, but the brain suffers the most, and the eyes.”

The disease particularly throws off a group of cells in the brain called glial cells. One type, oligodendrocytes, produces the white sheathing called myelin that protects many neurons.

“These patients, and also our lab mice, have ineffective myelination,” Wood said. “That’s one thing that may be impeding brain function.”

Other glial cells, microglia and astrocytes, both have immune functions in the brain, and in this study, the researchers were able to observe for the first time that the latter were not behaving normally.

“The astrocytes’ activity is unusual in this disease and associated with increased inflammation,” Grishchuk said. 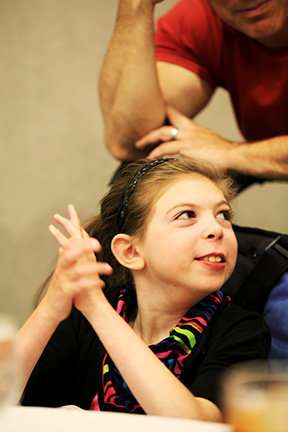 Grishchuk trained in the lab of Susan Slaugenhaupt, an MLIV pioneer who initially discovered the causal gene at Mass General and developed the mouse model used to study and fight the disease. Slaugenhaupt collaborated on this study.

A certain type of multiple sclerosis, remitting-relapsing MS (RRMS), shares this odd astrocyte behavior, which gave the researchers the idea of testing a drug used to treat that disease in MLIV cell samples.

“We thought fingolimod would have a good chance because it works on astrocytes in MS,” Wood said.

It tested successfully in the researchers’ mouse-MLIV-astrocyte lab cultures, inhibiting the astrocytes’ abnormal behavior. Now, the researchers want to move on to live mouse models to see if treatment helps brain function.

Fingolimod was recently improved for pediatric treatment of RRMS. Also, if it positively affects astrocytes in clinical trials, there is hope fingolimod could also improve other glial cells’ functioning.

Very few people carry the mutated gene that causes MLIV, and the gene is recessive, meaning that to get the disease, not only do both parents have to carry it, but both have to pass on their respective recessive gene to the child.

Since the affliction is so rare, parents of a child with MLIV usually spend years going through misdiagnoses before correctly determining their child’s disease. And, ironically, though the effects of the disease are obviously visible, early on, neural damage is not.

“It’s neurodevelopmental in very early childhood. The neurodegeneration kicks in much later in life,” Grishchuk said.

Once a clinician or parent stumbles onto the disorder in medical literature, it can be confirmed by a genetic test. But then the parents are confronted with the cruel fact that there is no treatment at all for MLIV.

As with many rare diseases, research and development funding for MLIV is scarce, so researchers are pushed to find promise in existing FDA-approved medications for other conditions, so that clinical trials may become more likely.

If fingolimod does make it to a clinical trial to treat MLIV, it may be a one-shot proposition. If the trial fails, then subsequent clinical trials may not be possible for many years, since the patient pool is very small and participation in a failed clinical trial often rules out a patient’s inclusion in further trials with different medications.