Following the 2018 Nobel Prize for Medicine, global attention is now more than ever turned toward the promise of immunotherapy in oncology. An international team’s work has shed new light on a molecule called TIM-3 that might play a key role in the regulation of the immune response.

Scientists and physicians from the Research Institute of the McGill University Health Centre (RI-MUHC), the Montreal Children’s Hospital of the MUHC (MCH-MUHC), and McGill University in collaboration with French teams from AP-HP, Inserm, Université Paris-Descartes and the Imagine Institute at the Necker-Enfants Malades Hospital, have singled out this protein as the next potential target for immunotherapy treatments in patients with cancer and other diseases.

These results are being published in the journal Nature Genetics on Monday, October 29.

Researchers found that when the TIM-3 protein is suppressed or inactive, the immune system becomes completely “unleashed” and T cells are uncontrollably over-activated, resulting in a rare form of lymphoma (a form of cancer that starts in the lymphocytes) called subcutaneous panniculitis T lymphoma (LTSCP).

The team of researchers has identified two founder mutations at the origin of this syndrome, which act directly on the TIM-3 protein, preventing it from expressing itself on the surface of the lymphocytes and attacking the cancer cells. 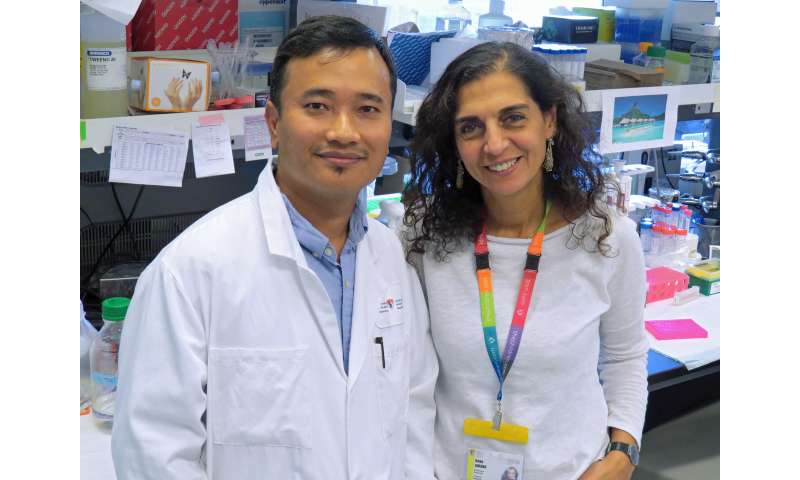 They also found that this form of lymphoma associated with over-activation of the immune response was more widespread than they first thought. Both mutations have been found in individuals of East Asian, Australian, and Polynesian origin as well as in patients of European origin.

This work was based on findings from the teams at the RI-MUHC and the MCH-MUHC, showing the same rare form of lymphoma in brother and sister. After sequencing their genomes, the researchers discovered that both patients carried the same mutation on a gene called HAVCR2 that codes for TIM-3 and that it was transmitted by their parents.

In discussions with colleagues in Australia and France, the team realized they too had similar cases of patients with the same mutation (Tyr82Cys) who seemed to be mostly of East Asian or Polynesian descent. Another mutation (Ile97Met), on the same gene, was identified in patients of European origin. A functional study of these mutations, conducted in Paris, confirms their responsibility in this new genetic disease. In all, 17 pediatric and adult cases were the subject of this scientific publication.

“The discovery of this mutation has shed light on a previously undescribed mechanism that allowed us to explain both the clinical presentation and the very particular evolution of these lymphomas under treatment,” explains Dr. David Michonneau from the hematology-transplant service in the Saint-Louis AP-HP hospital.

According to Dr. Geneviève de Saint Basile from the laboratory “Molecular basis of immune homeostasis abnormalities” Inserm at the Imagine Institute and the center for the study of immunodeficiencies at Necker-Children’s Hospital AP-HP, “The results of this collaboration demonstrate the regulatory role of the TIM-3 molecule in humans and they also provide strong arguments for reconsidering this entity as an inflammatory rather than a malignant pathology, and for promoting the use of immunosuppressive drugs in its treatment.”

“For these patients with this rare form of lymphoma, our results reinforce the use of immunosuppressive therapies that will provide much better results and fewer side effects than cytotoxic chemotherapy,” says Dr. Nada Jabado, who is a clinician-scientist from the Child Health and Human Development Program at the RI-MUHC and a professor of Pediatrics and Human Genetics at McGill University in Montreal.