When Chris R., a truck driver from North Carolina, drove to New York City to make a produce delivery on June 9, he was accompanied by his best friend, Blue, a two-year-old pit bull who has been traveling with Chris since he was a four-month-old pup.

The duo spent the night in Queens, and after the truck was unloaded the next morning, they set out for New Jersey. But when Chris pulled the big rig over in the Bronx to take a break, Blue bolted. 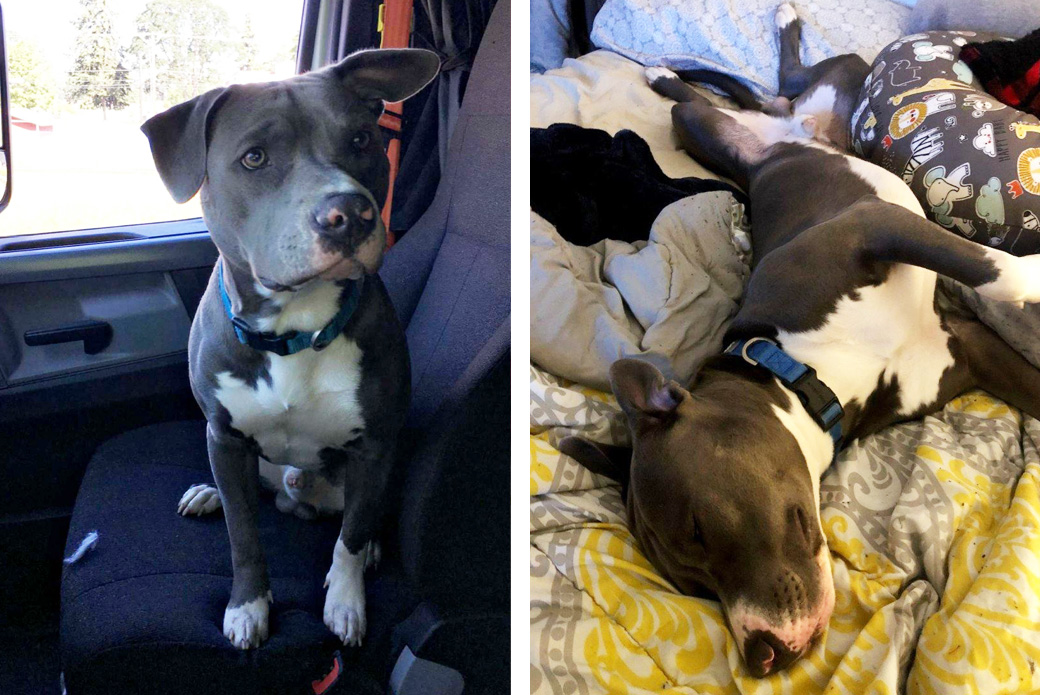 Left, Blue on the road with Chris and right, at home in North Carolina.

“Either something scared him, or he was excited,” says Chris, who thought the door was closed.

Chris dashed after Blue, leash in hand, running up an exit ramp, frantically asking people if they had seen Blue.

With no dog in sight, “my world just crumbled,” Chris says. “I didn’t think I’d ever get him back.”

“I broke down; I thought we’d lost Blue forever,” says Najee. “I kept praying and hoping he was okay.”

Found by a Good Samaritan

What Chris and Najee didn’t know was that a Good Samaritan spotted Blue trying to jump over a median on the FDR Drive in Manhattan. The driver pulled over, cornered Blue, and opened his car door. Blue jumped in.

“Blue knows to get in the car when the door opens,” says Najee, who posted Blue’s photo on a Manhattan Lost and Found page on Facebook.
The post soon had 197 shares, including on a Bronx Facebook page.

Almost immediately, Najee got a call from a woman who thought she had found Blue.

“It looked like Blue, and I wanted it to be Blue, but it wasn’t,” says Najee.

Meanwhile, Blue’s finder drove him to the ASPCA Community Veterinary Center (CVC) in the Bronx. Blue suffered from bloody abrasions, and layers of his paw pads had been torn off. 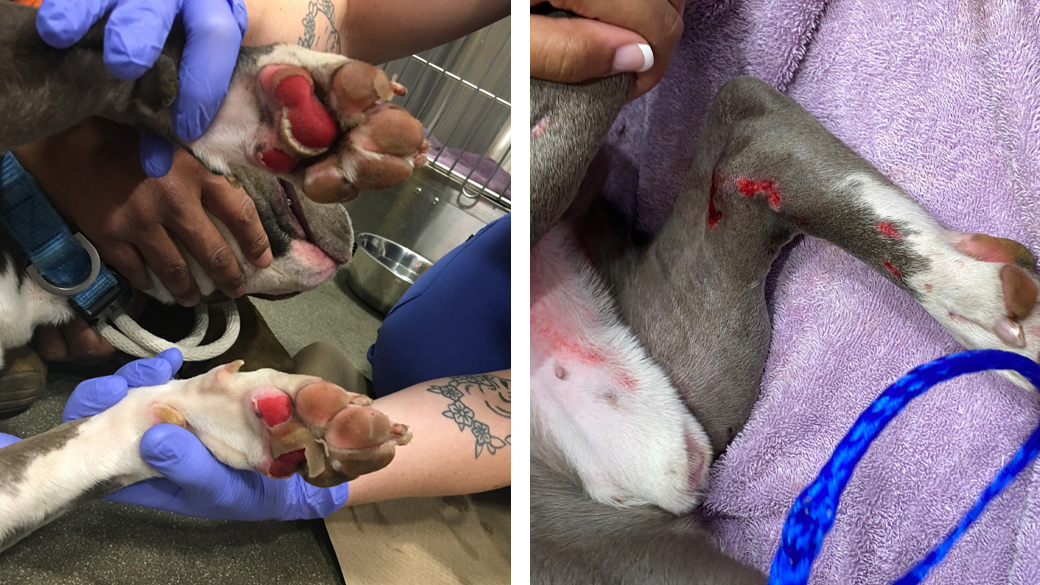 Masiel Ramirez, a Patient Liaison at the CVC, checked the Bronx Lost and Found page and compared Blue’s image to the dog in front of her. It was a match. 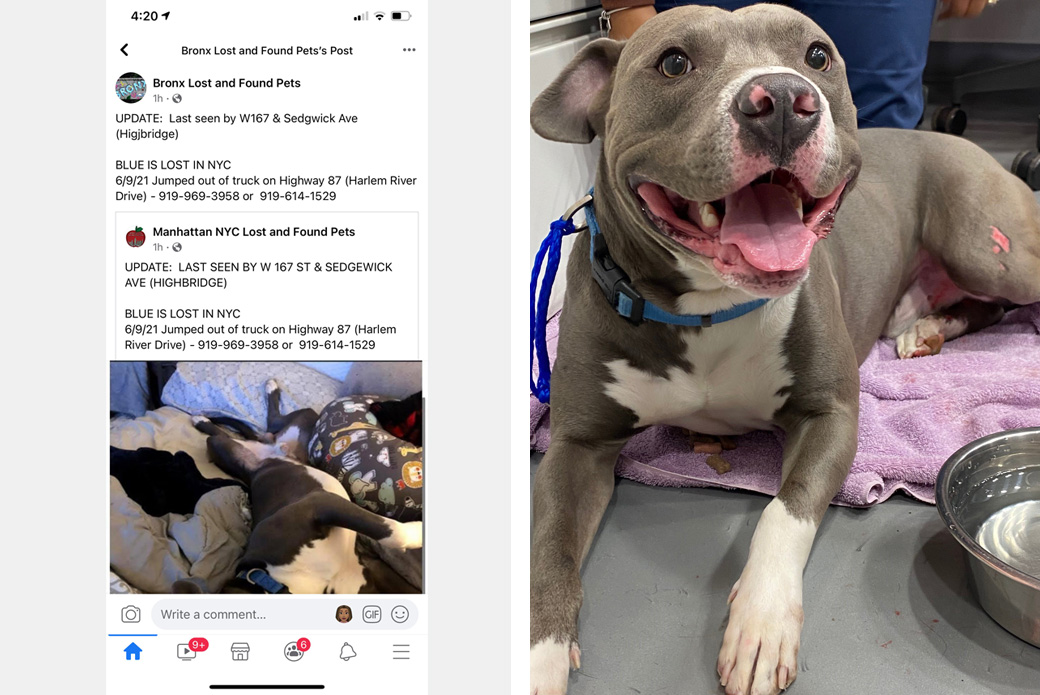 Masiel Ramirez, a Patient Liaison at the CVC, compared Blue to the image she found on a Lost and Found Facebook posting, left.

“Blue looked amazing, and I just knew he had to be someone’s pet, Masiel says. “He had the same blue collar, same markings, and same goofy face. I got so excited when I saw that.”

At 5:00 PM, Lauren Fusco, Operations Manager at the CVC, relayed the news of Blue’s identity to the Hospital and Adoptions teams. His wounds were bandaged, and he was transported by Victoria Maldonado, Coordinator of Field Operations, to the ASPCA Animal Hospital in Manhattan for urgent care.

“Though we were at capacity, we squeezed Blue in,” says Ruth Allen, Director of Admissions and Matchmaking. 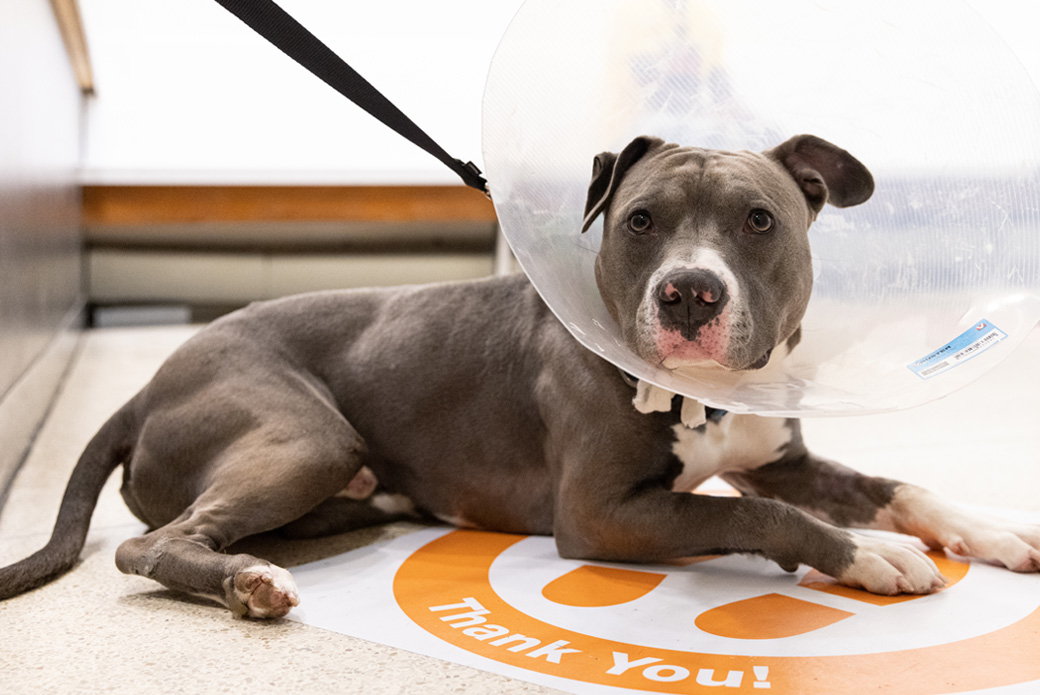 Blue in the lobby of the ASPCA Adoption Center.

Lisa Berger, a Matchmaker, phoned Najee and told her that Blue had been found and was on his way to the hospital. When Ana Hernandez, Manager of Admissions, reached Najee on a video chat, Blue whined when he heard the familiar voice.

“I was ecstatic,” says Najee.

Unable to maneuver his enormous truck into Manhattan, Chris headed home with plans to drive back to New York in a car to retrieve Blue.

Dr. Halle Becker, a veterinary intern, kept Blue at the hospital through the weekend to monitor his pain and change his bandages. Blue’s family also authorized a complimentary neuter and microchip for him.

“He was one really lucky dog,” says Dr. Becker.

“In a big city like this, finding Blue was like finding a needle in a haystack,” adds Ruth.

Blue provides emotional support for Chris, a U.S. Army veteran, and loves everyone he meets.

“He’s emotional support for all of us, actually,” says Najee, telling how Blue comforted the entire family when Najee’s grandmother fell ill with COVID-19 in 2020.

“He really won my mom over,” says Najee, whose grandmother eventually recovered. “We all saw it. He doesn’t like to see people cry.”

Chris made the eight-hour drive back to Manhattan on Monday, June 14.

“It’s Daddy!” Ruth said as she walked Blue into the lobby, where Chris was waiting. Several ASPCA staff witnessed the emotional reunion.

The ASPCA’s Ruth Allen, Director of Admissions and Matchmaking, left, and Michael Riches, Matchmaker, were among those who helped facilitate Blue’s return to Chris. Below, Ruth escorts Blue to Chris’ car.

Chris and Najee, a stay-at-home mom to their two children, are overjoyed that Blue is back home, where they indulge him with ginger snap cookies and an ice pop now and then. 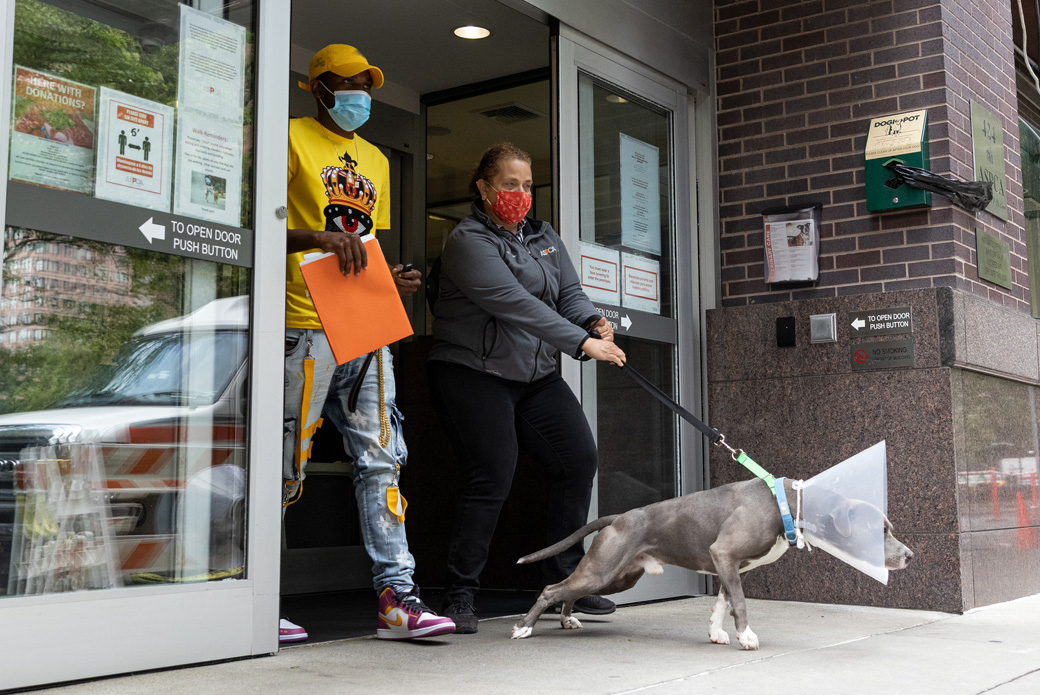 “Right before Blue’s incident, we had all watched a movie about a loyal dog,” says Najee. “I really do believe that dogs are man’s best friend.”

“We make matches every day,” says Ruth, “But there’s something special about returning a pet to his family—it’s incredible gratifying.” 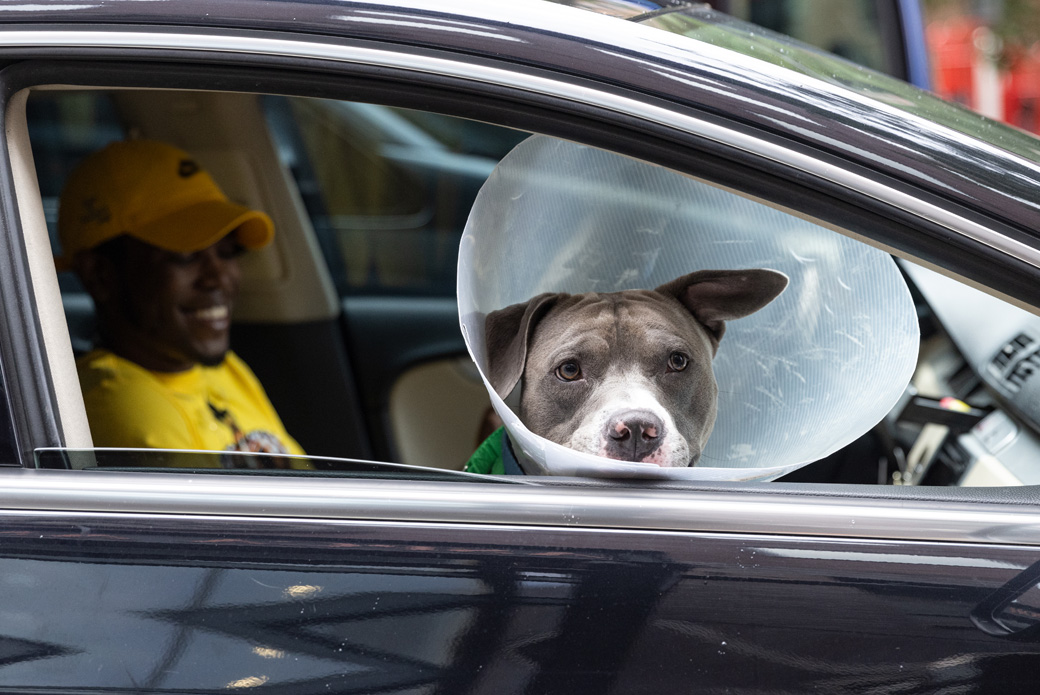