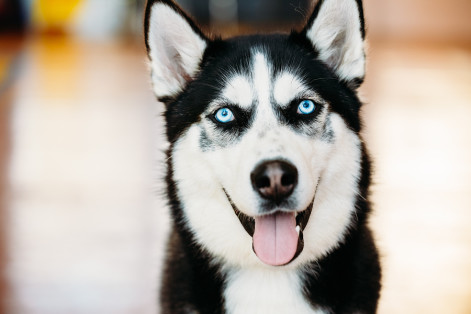 A Husky speaks his mind about entering the dog kennel!

Ever seen a pooch flat-out refuse to go into a dog kennel? Okay, maybe that was too broad of a question–we all know that pets, if given the option, would rather not be kenneled! And even those who politely obey a command to enter one rarely do so with a sense of joy. So let’s rephrase that question: have you ever seen a pooch SAY he’s not going into a dog kennel? If the answer is no, then prepare to be shocked by the latest Fetch! Pet Care video of the week!

The beautiful Husky pup you’re about to meet is only 11 months old at the time of this video’s taping. Not only is ‘Blaze’ a devastatingly handsome guy, but he’s quite articulate, too! As his owner tries to convince him to enter his kennel, just watch how Blaze tells him “nooooooo” over and over and over again!

Clearly, Blaze knows what he wants out of life and his plans do not involve wasting a moment of it in a dog kennel! As funny as the video is, we understand Blaze’s resistance. What pet ever wants to be confined to what basically amounts to a cage? While we sometimes have to place a pet in a dog kennel for their own safety (such as when traveling) or when they’re learning new behaviors (as in crate training), all dogs would much prefer to skip dog kennels altogether. Trust us when we tell you that they’d rather have a Fetch! Pet Care sitter come and hang out with them at home than to ever spend time cooped up in a dog kennel.

Back to Blaze, though. Is he a funny dude or what?! He’s not intending to make us laugh…he’s quite serious, in fact…and we know that dogs are highly intelligent, but hearing him be so vocal about his refusal is simply awe-inspiring! We don’t know whether Blaze actually won the battle, but we sure are glad that his owners let us watch.

Do Your Pets Sing the Dog Kennel Blues?

Tell us what you think about Blaze and his resistance to his dog kennel. Do your dogs resist dog kennels in a similar manner? We want to hear your thoughts on what you just saw and remember to tune in again for our next video of the week!