Home » Pet Care » From a Life of Cruelty to One Full of Love: How Wish Got His Wish!

In the summer of 2021, Lauren Cowell, ASPCA’s Director of Field Operations, and her team, alongside local law enforcement, helped rescue over 80 dogs from a dogfighting ring operating across Long Island, New York and several other states.

As lead on the scene, Lauren was in charge of organizing the flow of the operation and making sure everything was done correctly so that any evidence collected from the scene could be used to further the investigation and prosecution. But while keeping everything running smoothly, it was impossible for Lauren not to notice the horrific scene she was standing in.

“At one location, there was a wall of cages in a dark basement with no light,” Lauren remembers. “The dogs didn’t have any food or water or mental stimulation. I remember one dog was literally bouncing off the walls from side to side, there were no shavings left in the bottom of his crate because he was just jumping from side to side, literally going crazy in this little box.”

Among the dogs rescued was Wish, a very fearful black and white pit bull-mix. 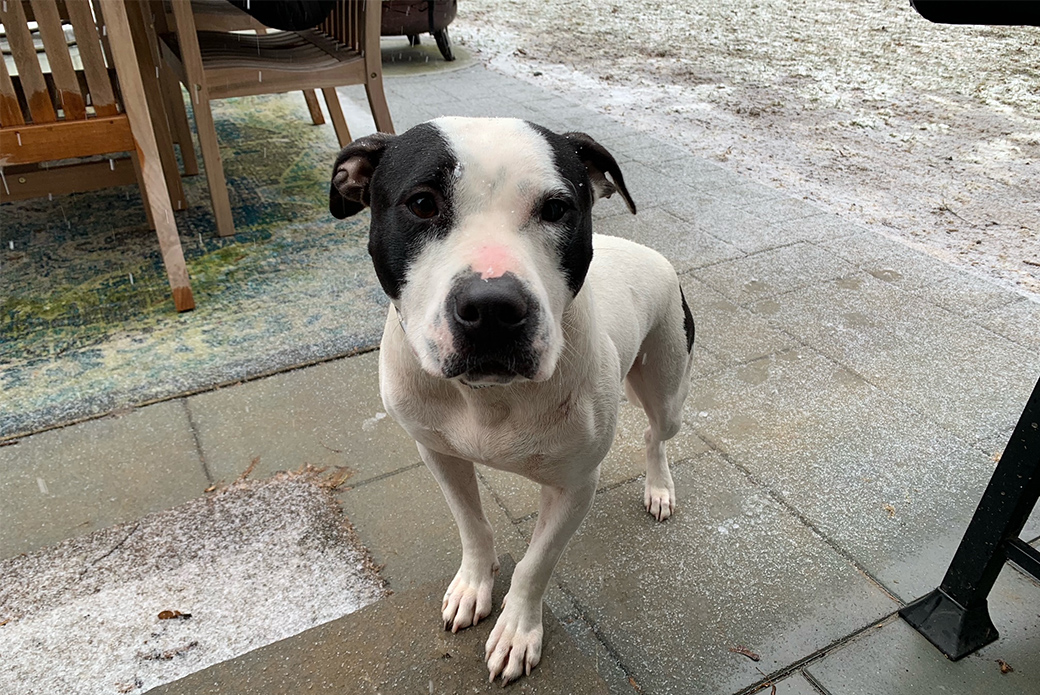 After being removed from the scene and given medical clearance, Wish was brought to the ASPCA Cruelty Recovery Center (CRC) in Columbus, Ohio, but didn’t stay there for long. Because of how fearful he was, Wish was transported to the ASPCA Behavioral Rehabilitation Center (BRC) in Weaverville, North Carolina, which specializes in providing behavioral rehabilitation for severely fearful dogs.

Coming Out of His Shell

“When Wish first got to the BRC, he was pretty shut down and quiet,” recalls Cecelia Erwin, Behavior Rehabilitation Specialist at the BRC and Wish’s caseworker. “He would sit in the back of his kennel with this hangdog expression.”

But despite what Wish had been through, he wasn’t very fearful of people.

“Wish was more afraid of new environmental things rather than people,” says Cecelia. “He was a little shy when he first met you, but he could warm up pretty quickly. He had a really hard time in new environments. He would just shut down and sit in the corner. Or you could be out walking him, and he would do the “pancake dog,” where he would just flatten out and refuse to move any further, so we spent a lot of time building up positive places for him and getting him excited about going out.”

Eventually, Wish started becoming comfortable in certain spaces at the BRC, and Cecelia and her team could see his true personality begin to blossom.

“He’s got a goofy and silly and playful personality,” Cecelia tells us. “He really likes to play with other dogs and with people he likes to cuddle and snuggle on the couch. You could tell when he wasn’t feeling very well when he just hung out in the corner and didn’t want to interact with anyone.” 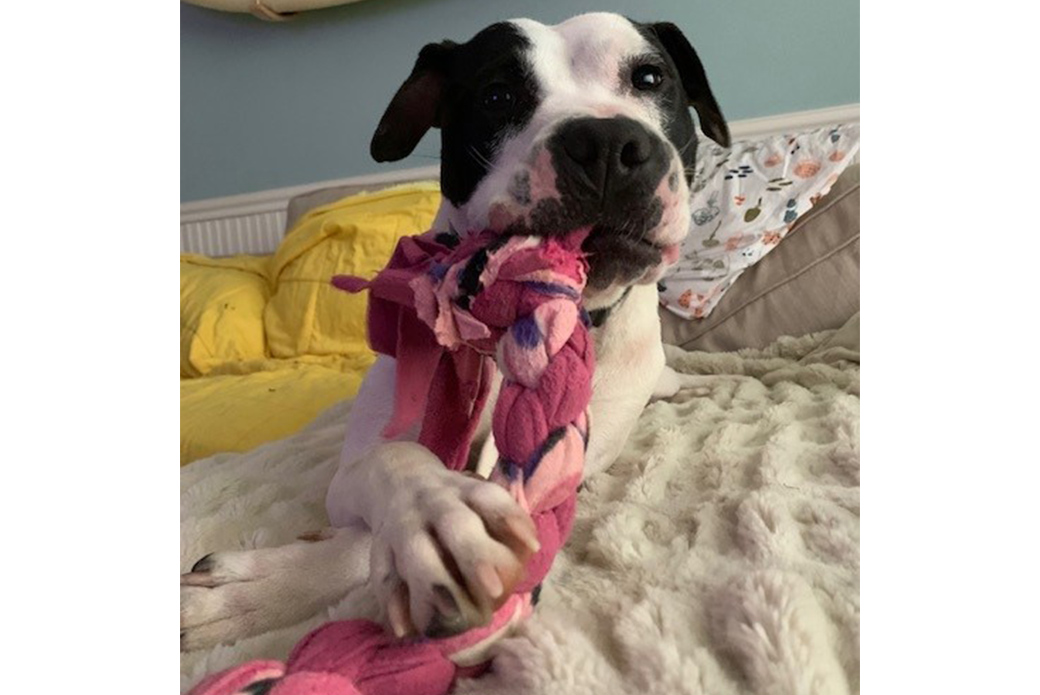 But after working on his profound fear of new places, Wish began having a really hard time being housed in his kennel. He would jump at and climb up the walls, so much so, that it caused his feet to bleed.

To help this behavior, Wish was housed in one of the “real-life” rooms at the BRC during the day. This room is set up like a home, including a couch, so that the dogs can get a sense of what living in a home environment would be like.

“We all rotated who would hang out with Wish in the real-life room, so he was very popular,” says Cecelia. “We would all play with him, so if you were in Wish’s room, you wouldn’t get a lot of work done but you would have a lot of fun.”

After seven weeks of treatment at the BRC, Wish was ready to go to a foster home, which would be the real test to see if he was ready to be adopted. 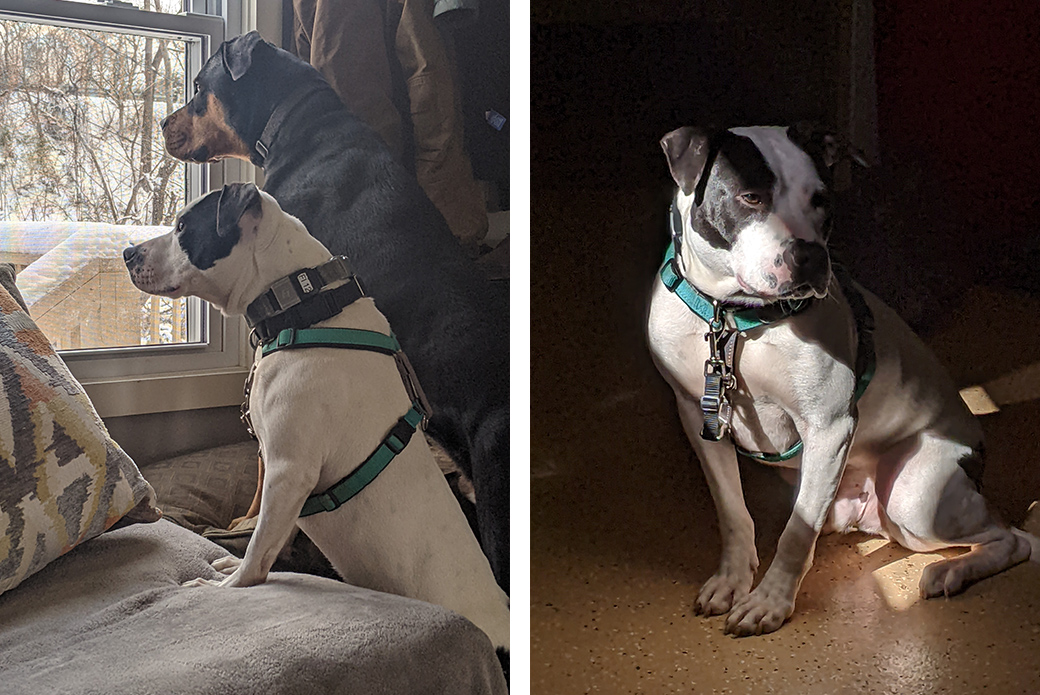 “Wish really came into his own and blossomed in his foster home,” Cecelia tells us. “Pretty much straightaway, he got along with the foster’s other dogs and with the cat. He really blossomed into a great pet dog.”

Having shown how well he could do in a home after just two weeks in foster, Wish was ready to find a home to call his own.

Mike H. and his wife, Lauren had been looking for a dog for a while. After the passing of one of their three dogs, the couple felt like bringing a new dog into their home would help fill the void of losing their beloved pet.

“We had a lot of people searching for a dog for us and one of our close friends said they have the perfect dog for our family, and we’d have to drive over 10 and a half hours to see this dog. So that’s what we did,” Mike tells us.

Before hopping into the car, Mike spoke with Wish’s foster caregiver and the BRC staff to make sure this would be the right fit. 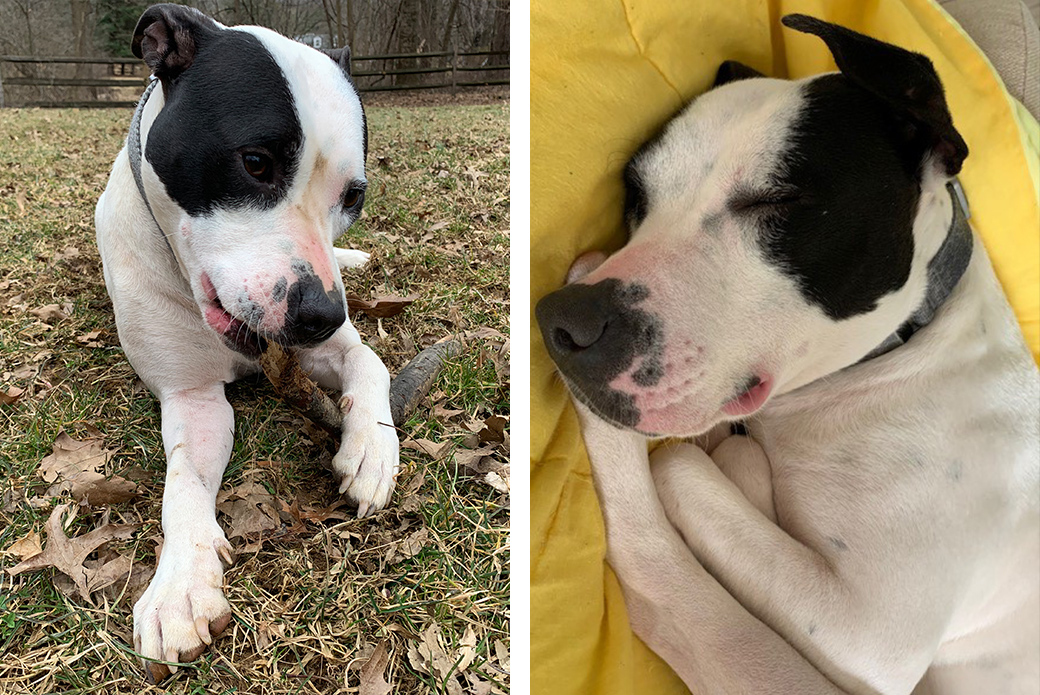 “We were looking for another male pit bull with a laid-back energy who could handle being prodded a little bit by our female dogs, and that’s how Wish was described to us,” says Mike.

So, the couple and one of their dogs, Madison, drove from their home in New Jersey to North Carolina to pick up their new pup.

“We couldn’t bring Wish home without knowing that him and Madison got along,” Mike tells us. “They immediately got along, and I knew that if those two got along, Wish and Ally [our other dog] would get along.”

When Wish first got home, it took him some time to warm up to a new place and a big, new family.

“He had trouble getting into the car so we would pick him up and he didn’t like to walk with us in the beginning,” recalls Mike. “He would walk a little bit and then would pancake and wouldn’t budge. It was a new situation for him, so he was scared, but that behavior lasted about a week.”

Yet, having a bit of trouble in the beginning didn’t stop Wish from immediately bonding with his two new canine sisters.

“Wish and Madison look like Yin and Yang. They play tug and howl at each other and roll on top of each other,” says Mike. “Ally and Wish will run around all day and jump into each other and knock each other over.”

But Mike’s favorite thing of all is watching Wish learn new things from Madison and Ally.

When the weather was warm, Mike and Lauren would take their three dogs for a walk and Madison and Ally would go for a swim in the river. Madison learned to swim from their dog who passed, Morris, and then Madison taught Ally how to swim. Initially, Wish was too nervous to go into the river, he’d put a paw in and then run away. 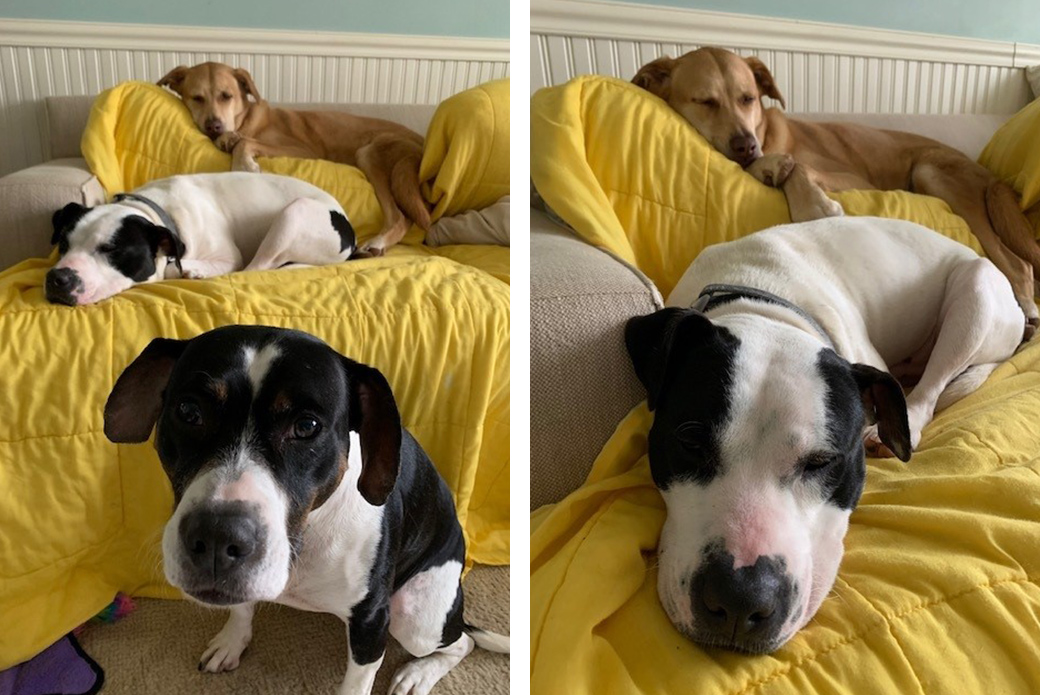 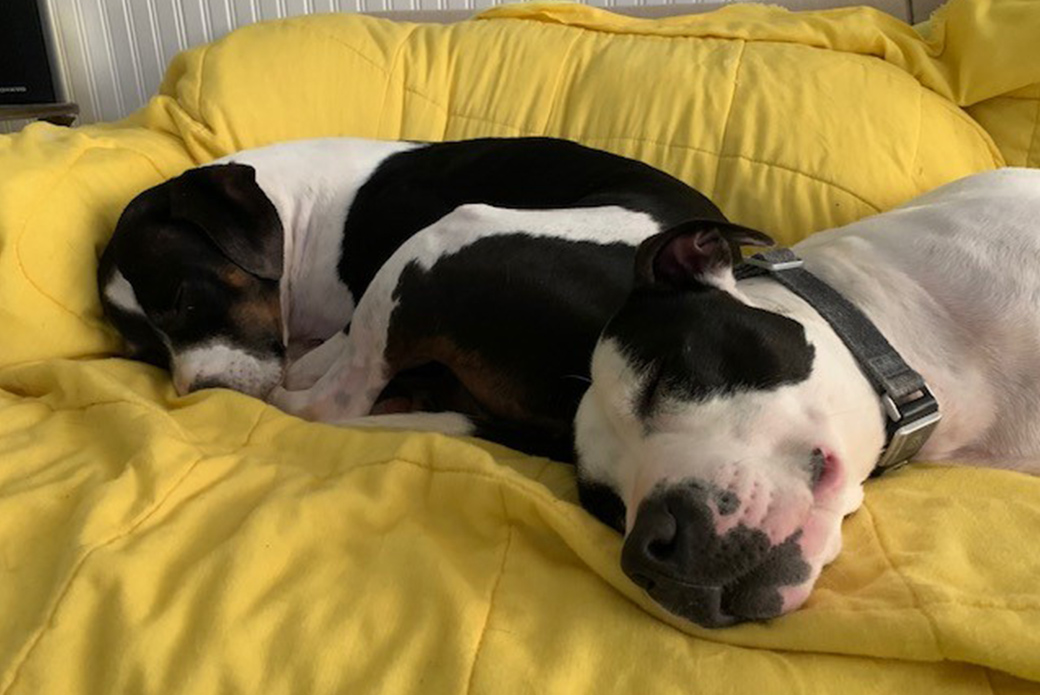 “Then after seeing Ally and Madison do it a few times on walks, one time he said, ‘No, it’s my time to dive in this river,’ and he dove in!” Mike remembers.

Not only does Wish now love to swim, but he has found another new love, Starbucks “Puppuccinos”!

“It’s so cute, he anticipates going to Starbucks,” says Mike.

Kicking Bias to the Curb

For dogs with backgrounds like Wish’s, there often comes an unfair and untrue bias about their behavior. The truth is, it all depends on the individual dog. Many former dogfighting victims like Wish go on to lead perfectly “normal” and happy lives.

“I wouldn’t use their background to disqualify a dog,” Mike says. “I would really lean into people you trust. We had good talks and asked questions of the ASPCA before we went down there. I rather not know their story and judge the dog right then and there. Wish is a big mush ball and I’m really glad we were told of him and made the trip down to Weaverville to pick him up. It’s working out really well.” 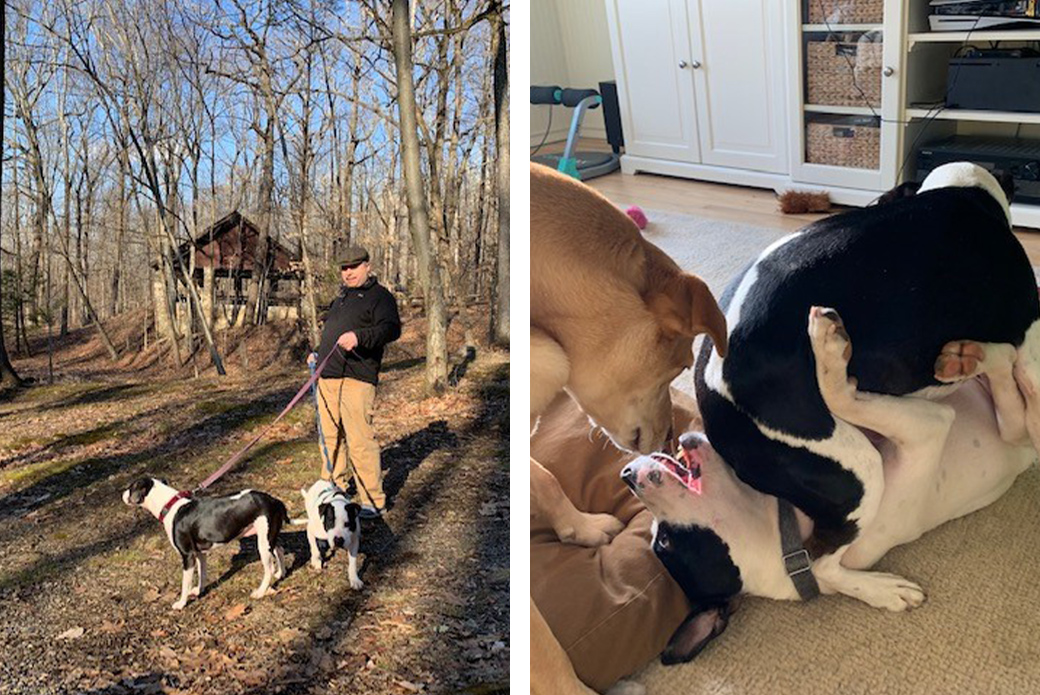 Wish finding a home didn’t just impact him and his family, but everyone who worked with him.

“I’m just really happy for him,” says Cecelia. “He had a really hard time from the beginning when he was just shut down, so it’s great that he’s happy in his own home with his own family.”

“I don’t tend to get emotional on scene or during field operations, I get more emotional seeing how happy the dogs are days, weeks, months later just knowing that they used to have miserable lives and now they’re just hopefully a distant memory for them and they know that they’re safe and will never have to go through that again,” says Lauren Cowell.

You can help dogs like Wish by adding your name in support of the HEART Act today!