On May 8, Clementine, a stray three-year-old Catahoula Leopard/Hound-mix, was dropped off at the Terrebonne Parish Animal Shelter in Gray, Louisiana, about an hour’s drive southwest of New Orleans. Roughly four months later, on August 26, Hurricane Ida had formed in the Caribbean and was headed straight for the state.

The ASPCA National Field Response and Animal Relocation teams—already on the ground in Louisiana to assist animals and shelters the hurricane would likely impact—evacuated Clementine with 15 other “long-stay” dogs. Twenty-six cats were also evacuated in another vehicle.

As Hurricane Ida lashed into Louisiana on August 29—the 16th anniversary of Hurricane Katrina—Clementine and her canine colleagues arrived at the Tri-City Animal Shelter and Adoption Center in Cedar Hill, Texas, 16 miles southwest of Dallas.

Left, ASPCA transport driver Vicky Comrie with Clementine upon arrival at Tri-City; at right, Clementine at the shelter.

“Terrebonne Parish recognized the urgency to move these animals out, and by doing so, made much-need space for displaced pets in their community after the storm,” says Karen Walsh, ASPCA Senior Director, Animal Relocation.

While they’re not usually a destination shelter, Tri-City will step up to take on additional animals affected by disasters when they have the capacity and resources.

With their 500-mile, eight-hour journey complete, the cats spent the night at Tri-City before continuing their journey to additional destination partners the following day. The dogs, including Clementine, remained in the brand new “Lifesaving and Learning Center” at Tri-City and were made available for adoption.

On September 10, Clementine was adopted but was returned 11 days later because she didn’t get along with other pets in the household. She found another home on October 7 but was again returned, this time because she was “too active.”

“She has her challenges,” says Elaine England, Volunteer and Marketing Coordinator at the Tri-City Animal Shelter and Adoption Center. “She loves people and has lots of energy, but she doesn’t care for smaller pets. But none of these traits are unusual for a hunting breed like her.”

About that time, Captain Robert Moree of the Cedar Hill Fire Department wrote a letter to Fire Chief Rodney Smith proposing they adopt a dog from their local shelter to help the firefighters cope with their stressful jobs.

“We had wanted a dog for the station for a couple of years,” Capt. Moree says. “I had read a study of fire stations in the Northeast that said having a dog helped firefighters relieve stress.”

Capt. Moree obtained approval from each shift and outlined a plan to fence in a portion of the station’s backyard where a dog could safely play.

On October 27, after responding to a fire alarm near the animal shelter, Capt. Moree and his crew visited the shelter and described how they wanted an older dog.

“They introduced us to Clementine,” Capt. Moree says. “She took to us, and we took to her—instantly. Later that day, after we cleared another alarm, my Driver/Engineer, Bryan Wallen, and I decided to go get her.” 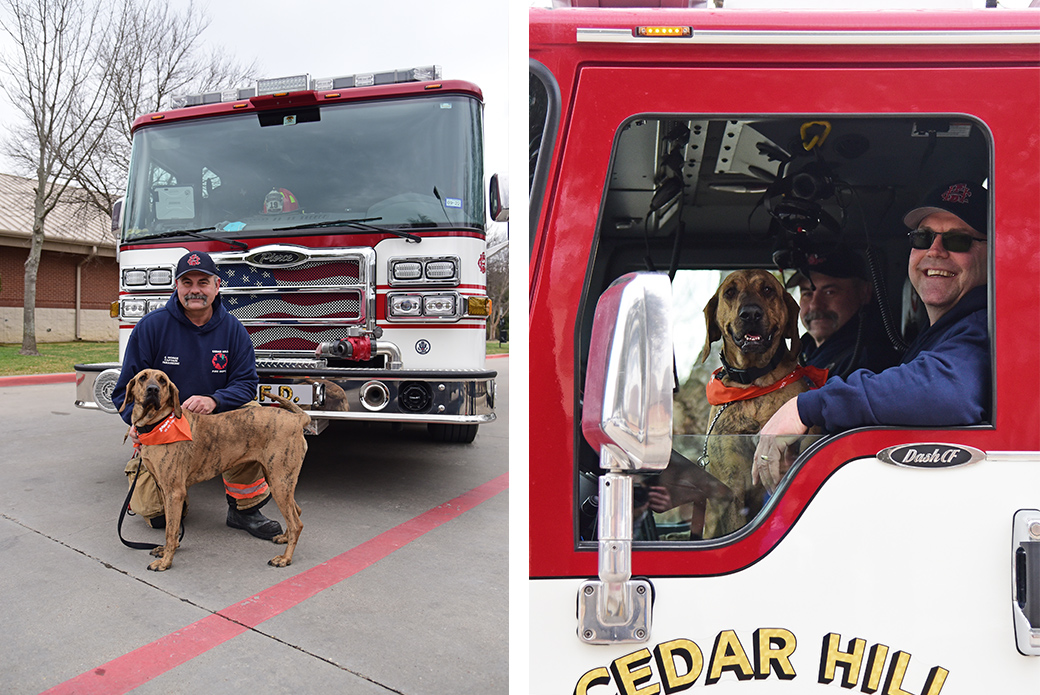 Capt. Moree is Clementine’s official adopter, but she lives full-time inside Fire Station #212, complete with an outdoor play yard.

“This lucky girl has multiple caretakers and the love of some of Cedar Hill’s finest,” says Elaine.

Settling In at the Station

After her adoption and treatment for heartworms, Clementine was ready for her adventure as a fire dog.

The play yard fence was a combined effort —the city’s Parks Department drilled the holes and the firefighters from Shift A built it during their shifts.

Over time, Clementine has proven herself to be a natural fire dog.

“She loves to ride in the truck,” Capt. Moree says. “The only problem is that when we’re on a call, she wants to jump out with the rest of us, so someone has to stay behind with her. She also howls when we turn on our sirens. She’s a pistol!” 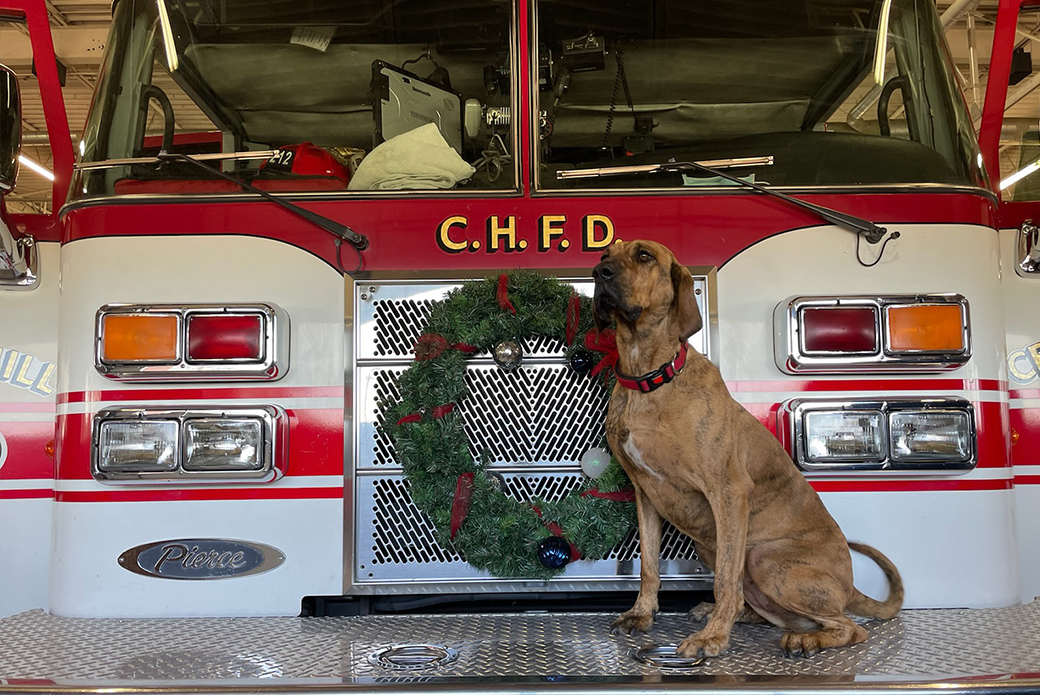 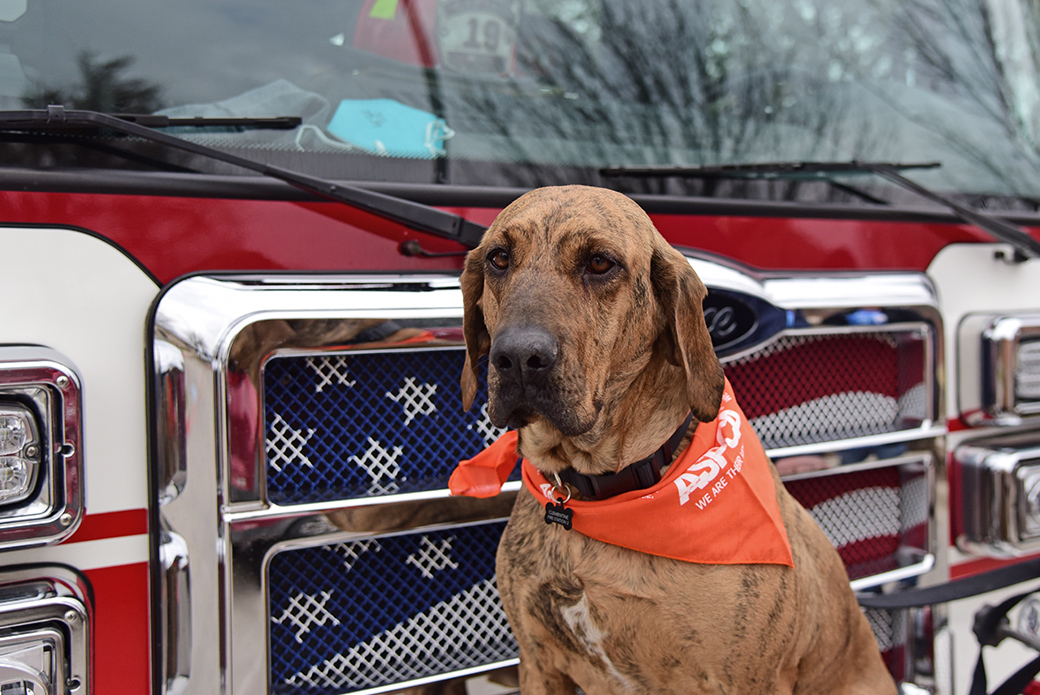 “Sometimes she hides those treats in our recliners if she doesn’t think anyone is watching,” Capt. Moree says.

“If someone is in the kitchen, that’s where she goes,” adds Firefighter Blake Brancato. “And she knows how to read a room.”

“She also knows who is the most likely to drop a bite of their dinner,” says Elaine. 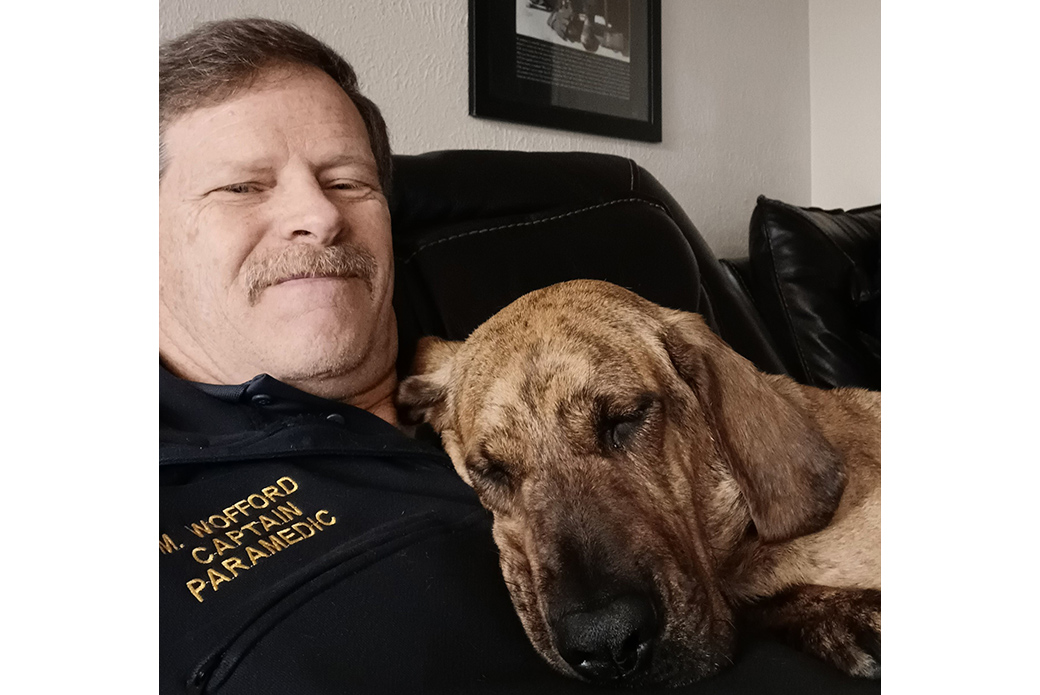 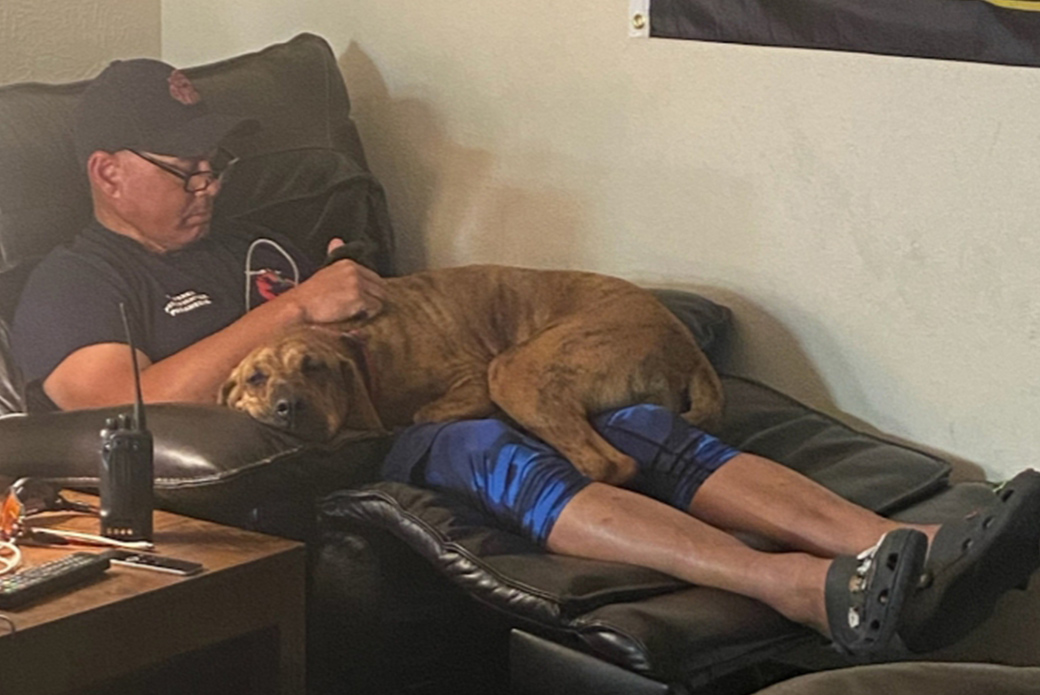 At night, Clementine sleeps in the dormitory with the firefighters.

“At first, she picked out the people she liked on each shift, but now she gets along with everyone,” Capt. Moree says. “When we’re away, we miss her as much as we miss our buddies at the station.”

“We all have dogs at home, and having Clementine here makes for a more relaxed atmosphere,” says Driver/Engineer Wallen. 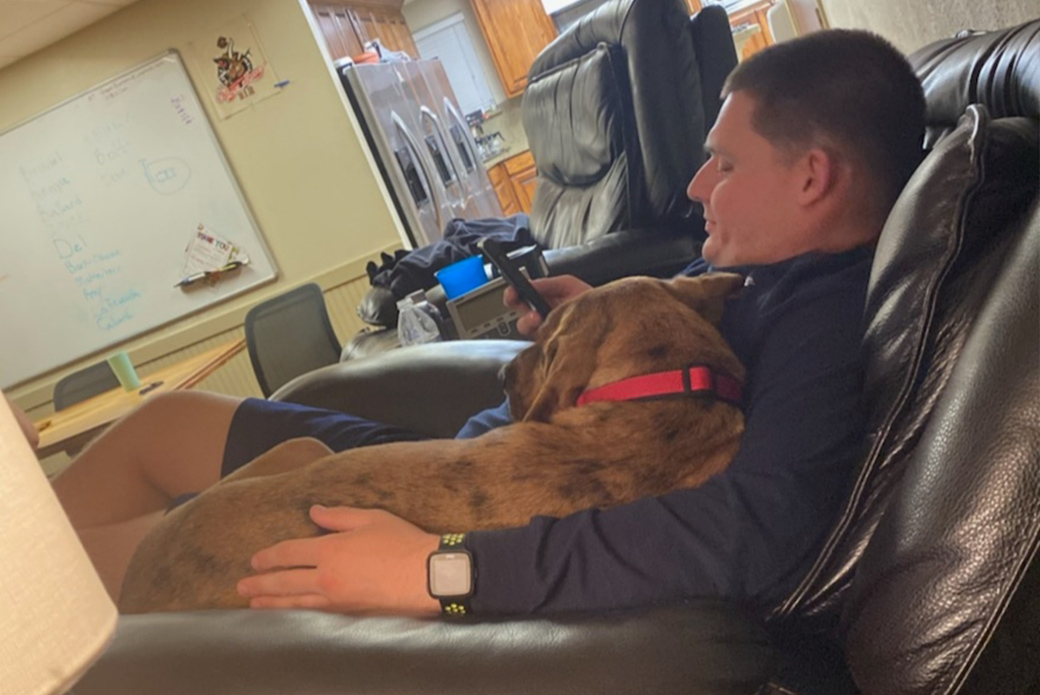 As Capt. Moree hoped, Clementine provides enormous stress relief for the firefighters, especially when they return from traumatic calls.

“Some nights we come back and have difficult things to deal with,” Capt. Moree says. “She’ll come over and put her head in our laps. She does as much for us as we do for her.” 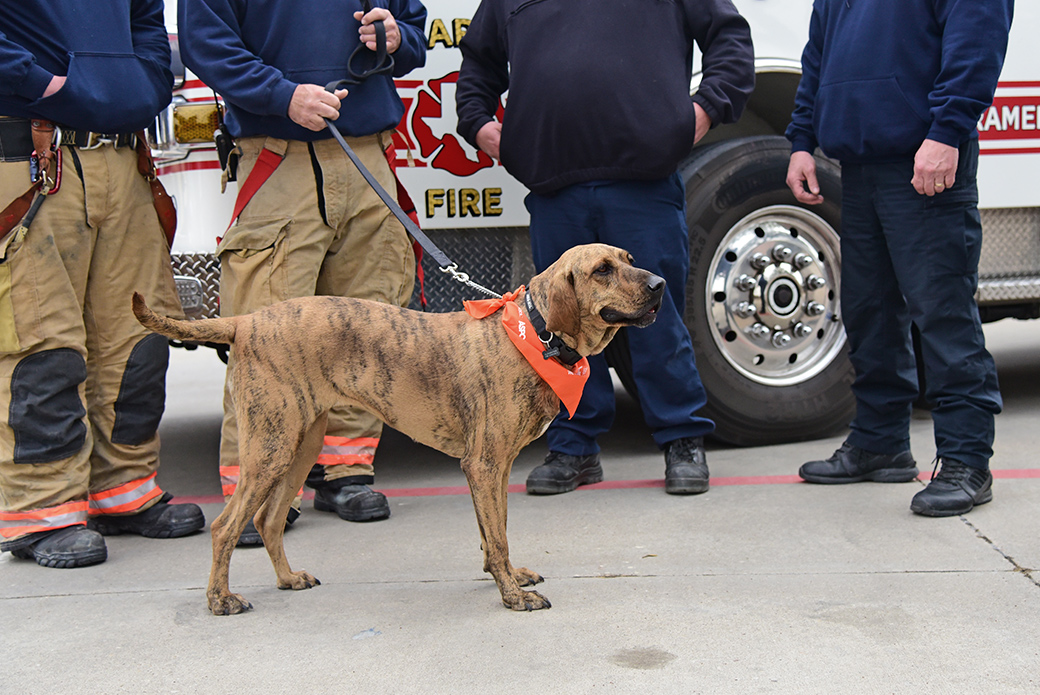