Missy D. had been a foster for the ASPCA for years, so when she got her latest foster kittens, she figured she knew what she was in for.

“Generally, it’s about the same. Kitties get delivered, they stay a few weeks, I take them to appointments, sometimes I find them homes and that’s it,” Missy tells us. “Occasionally, I have had difficult cases where kittens would be sick or need extra medication and that could be tough, but other than that I’ve found it to be a fairly easy process. This litter was much different.”

Missy soon found out, through visits to the vet, that a few of the kittens, including a special guy named Lewis, had special needs. 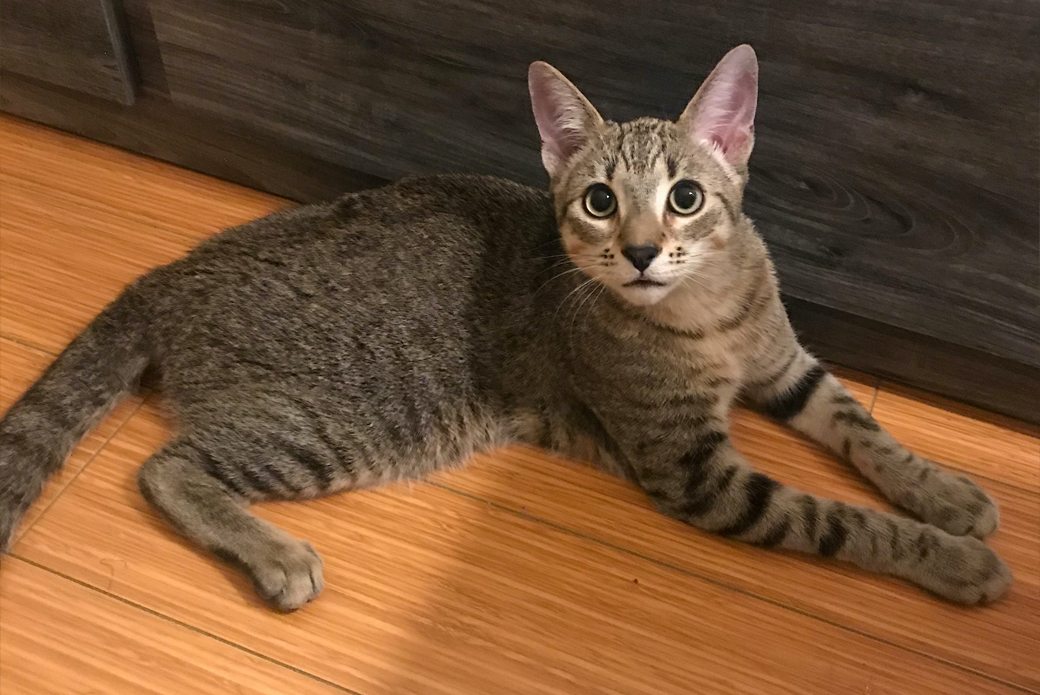 Lewis was brought into the ASPCA Los Angeles Foster Program on April 20, 2020, as a community stray with four littermates. He was estimated to be about four weeks old.

Before being available for adoption, young kittens are fostered until they are old enough to go to their new homes. That’s when Lewis and one of his littermates met Missy.

On Lewis’ initial intake exam, nothing abnormal was noted. However, after a short time with his foster caregiver, Missy noticed Lewis did things a bit differently than most other kittens. For example, when he walked, his back legs didn’t always stay up or he would wobble over to the side.

Missy worked with the L.A. Foster team to help diagnose Lewis’ issues. Soon enough, it was determined that Lewis has hindlimb ataxia, a disorder that affects and immobilizes the limbs, and a “bump” on his spine. 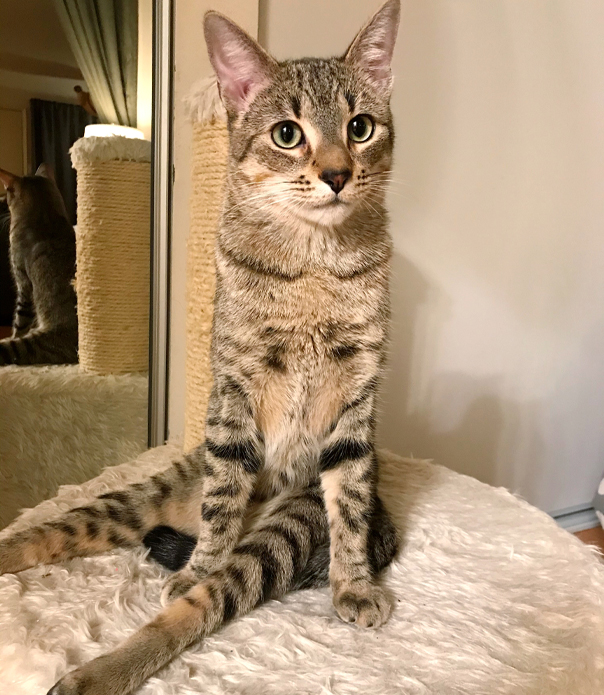 Three months later, for a follow up exam, the vet noted that Lewis also had a misarticulation of two vertebral bodies on his spine, which is consistent with spina bifida. Imagine if your fists are vertebral bodies, if you hold them in front of you and then rotate them 20 degrees outward, this is what Lewis’ spine looks like.

In September, Missy reached out to inform us that Lewis was also experiencing incontinence.

Yet, despite his disabilities and initial hurdles, Lewis was just like any other cat, happy to be playing and climbing around the house.

While caring for Lewis, Missy realized that the young cat had started to feel like part of the family.

“I noticed he was filling a gap between my two resident kitties and that was different from the other foster kittens.” Missy explains.

Typically, one of Missy’s resident cats loves all the foster kittens that go in and out of the house, while her other one is not as fond of them. But with Lewis, both cats played well with him and seemed to play better with each other when he was around. 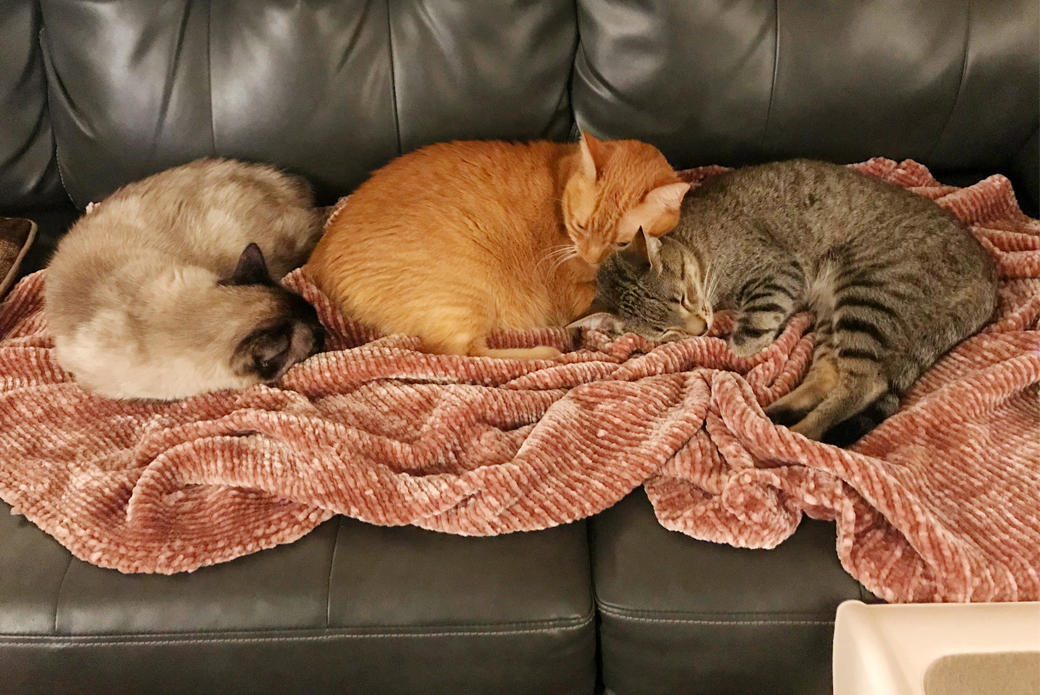 But it wasn’t just Lewis’ connection with the other cats that sealed the deal.

“I also noticed that when I described his care to potential adopters, most people responded by saying that it seemed like a lot and that it was more responsibility than they anticipated or were ready to commit to,” Missy says. “I’ll admit that it is more than your average kitty, but to me, it didn’t seem like anything out of the ordinary anymore.”

Missy was so used to helping Lewis express his bladder four times a day, singing him songs and telling him it was time to “go for a walk” to help him go, that it didn’t seem like a big deal to her any longer.

“Once I realized that he was fitting in with us that well, I couldn’t imagine him not being with us anymore. Luckily, my husband eventually agreed with me on that!”

Lewis was adopted by Missy and her husband in January 2021 after spending months getting to know and love them.

Missy’s two other cats have some health issues, including asthma and sensitive digestive tracts, certainly not as significant as Lewis’ mobility and neurological issues. 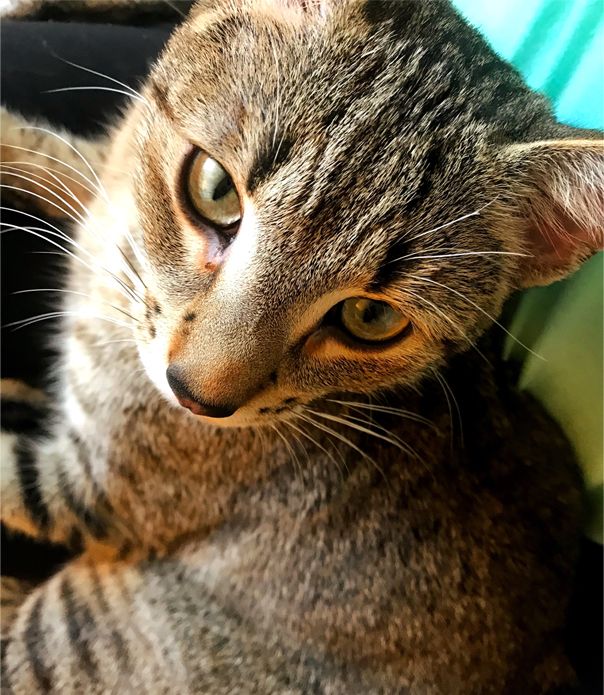 “I’ve never dealt with a kitty like Lewis–not at all. I had never expressed a bladder before I realized he needed it. Once he stopped successfully using the litter box and I figured bladder expressions might be helpful, I watched a few videos online and gave it a try,” Missy explains.

In the past, Missy had helped stimulate neonatal kittens to use the bathroom, so she had former knowledge to help Lewis. But overall, Missy dove in headfirst, learning as she went but knowing the ASPCA Foster team was a phone call away and always there for support.

She started following people on Instagram who also had disabled pets, including a paralyzed kitten named Chloe. She also joined online support groups for caregivers of disabled pets and learned even more there. 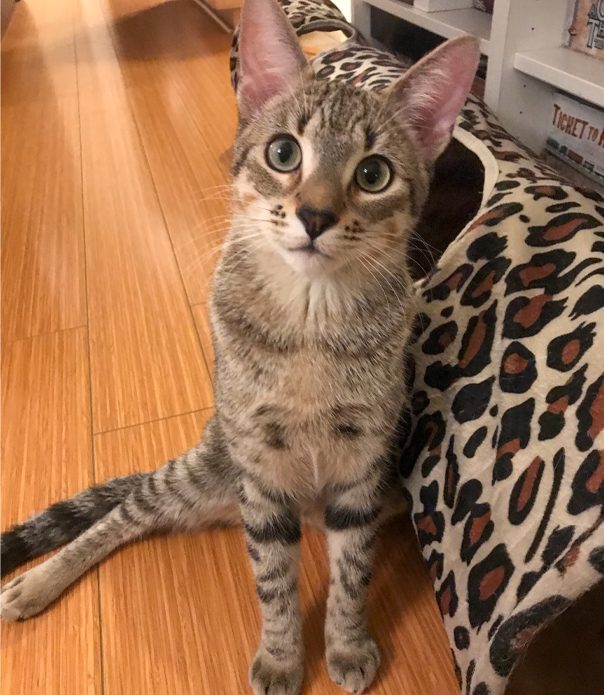 Following the adoption, Missy brought Lewis into her vet where the vet tech showed her how to properly express Lewis’ entire bladder so he could go longer between expressions, lessening Missy’s load throughout the day.

The more Missy learns, the more she’s able to help Lewis navigate and enjoy this big world in his own special way.

The family now has a set routine when it comes to taking care of Lewis. Missy or her husband help Lewis express his bladder every six hours. He also sleeps very well throughout the night in his playpen.

“We even got him a diaper changing table to make it easier for me to express him and store all of his pee pads, toys and blankets. That probably makes me sound like a crazy cat lady, but I swear it’s so much easier to express him standing level than having to crouch down all the time! Plus, that storge is great!”

On top of his new routine, Lewis absolutely loves his feline siblings and they adore him right back, “especially his big brother.” The three snuggle together and chase each other around the apartment all day long. 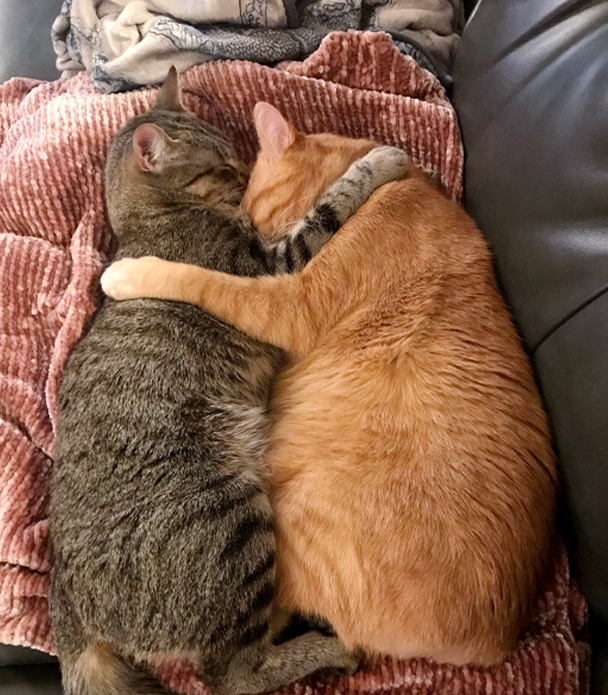 “All in all, he is the cutest, most adorable baby-faced squish kitten and we love getting to greet him every morning at his play pen and watch him ‘swiffer’ around,” Missy says. 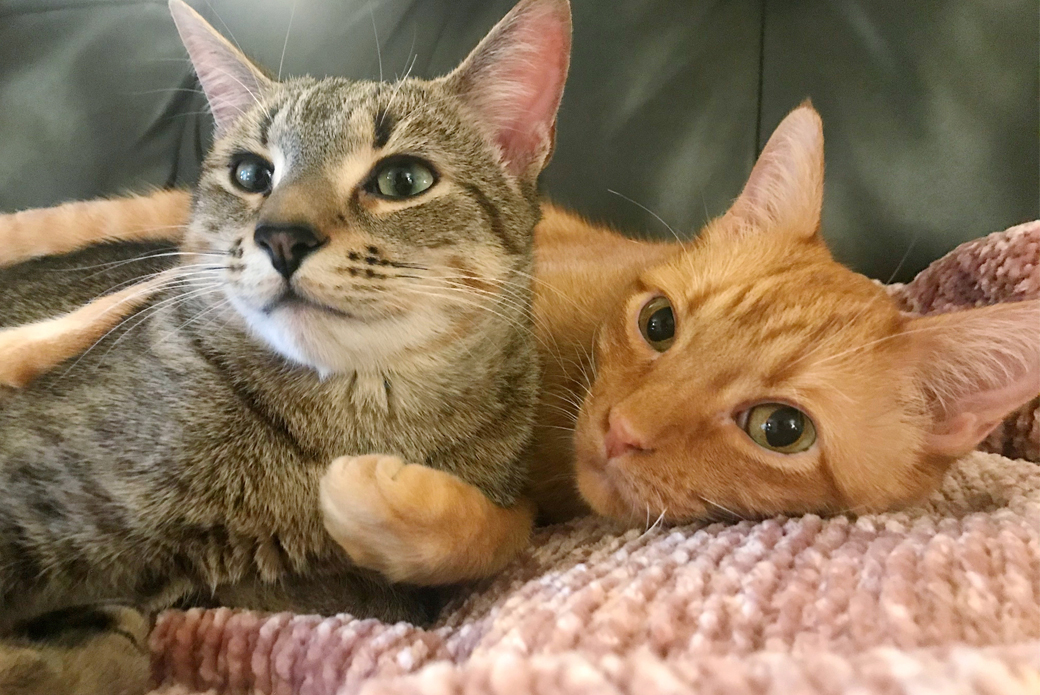 While Missy was able to give Lewis the life he deserves, she also cautions that it may not be for everyone.

“I would say anyone interested in adopting a disabled pet should know that with any animal, you’re committing for life (of course) but with a disabled pet, the commitment might be a little more. There’s a time, financial and emotional commitment to consider that’s greater than that of your typical situation.”

She also adds some other helpful tips, like talking to a trusted vet before making your decision about adopting and finding out what it’s like to be the pet parent of a disabled animal by joining an online support group. 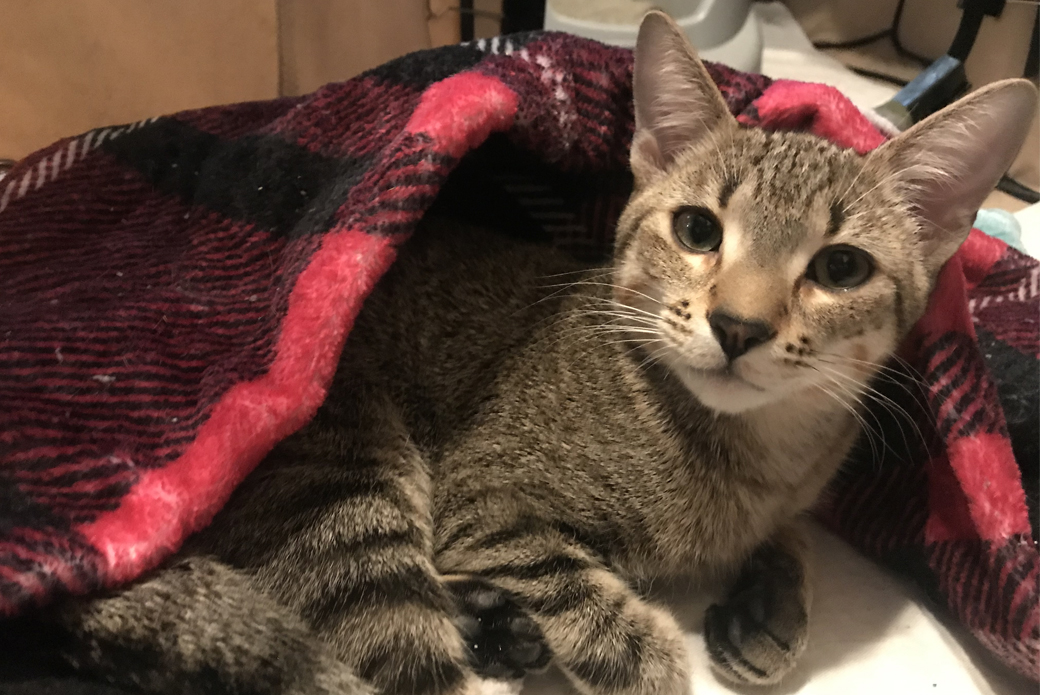 “Ultimately I felt like we would be able to give Lewis a great life,” she says. “It might not be right for everyone, but he seems happy here and we’re definitely happy to have him home.”

At the ASPCA, we could not be more grateful for fosters and adopters like Missy who are always willing and happy to care for our extra special furry friends like Lewis and for reminding us that specially-abled pets are just as loving (and adorable) as any other pet.