Do you need to go gluten free? The 12 little-known signs – including depression and nausea – that signal you might have coeliac disease

For this year’s Coeliac Awareness Week which runs from the 14th to the 20th of May, an expert has revealed the twelve signs and symptoms of the disease which should never be ignored.

Head to Instagram and you’ll find over 14 million #glutenfree posts.

This is no surprise when you realise that over 500,000 people in the UK alone are believed to suffer from coeliac disease without knowing it.

Coeliac disease is an autoimmune condition which means your body decides that healthy cells are foreign and so it sends antibodies out to ‘protect’ your body.

When someone has coeliac disease their body triggers an immune response to gluten entering their systems.

During this process, antibodies are released that damage the lining of their gut and can cause a number of unpleasant symptoms, which aren’t all tummy-related.

The problem with coeliac disease, director of Coeliac UK, Norma McGough, tells Healthista, is that it often goes undiagnosed or misdiagnosed. 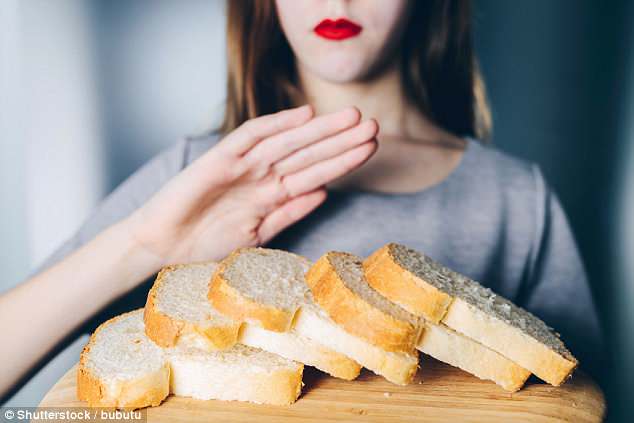 Coeliac disease is an autoimmune condition which causes the body to trigger an immune response to gluten when it is eaten, which damages the lining of the small intestine

Ms McGough explains: ‘It’s a common disease with a prevalence of about one in 100 in the UK but we’ve only got one-quarter of those people currently medically diagnosed.’

This means that there are still around half a million people in the UK who have coeliac disease but don’t know it.

So what does having this condition mean? According to McGough, coeliac disease can be hugely detrimental if left untreated.

‘It can result in children missing school, adults missing work and having days off for various reason,’ she says.

‘There are links with depression and I think in terms of your ongoing health, coeliac disease can have a big impact on an individual’s life.’

But it’s not all bad. Unlike other autoimmune diseases, there is a simple treatment for coeliac disease that works – sticking to a gluten-free diet.

‘Symptoms can be reversed by identifying what the problem is and treating it properly by cutting gluten entirely from the diet.’

Coeliac disease is a problem that affects the gut and so we often associate the condition with gastrointestinal symptoms.

However, the range of symptoms that coeliac disease is thought to cause is hugely varied.

Here are some of the signs and symptoms to look out for:

While these are the symptoms that most people associate with the condition, they often go misdiagnosed as IBS.

Research has shown that 11 per cent of the population globally has IBS but this diagnosis can lead coeliacs to live untreated and as such their symptoms will not disappear. 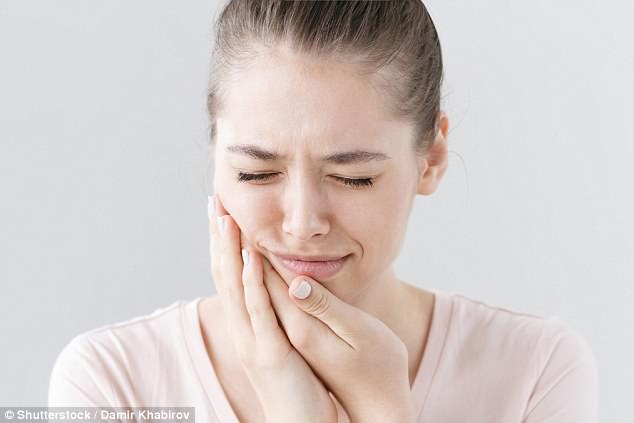 While this is a symptom that might not spring to mind when we think of gut problems, mouth ulcers are a common symptom of coeliac disease.

In fact, they’re a common symptom of autoimmune problems such as coeliac disease because they indicate a generally rundown system.

The dietician revealed that this is a symptom to be particularly aware of, especially if they’re serious.

‘I’m talking about mouth ulcers that have a particularly detrimental impact because the whole mouth is covered.

‘They’re particularly large and sore and its an ongoing problem for coeliac undiagnosed, not just the odd mouth ulcer.’

‘One of the problems with the under-diagnosis of coeliac disease is many of the symptoms are what you might class as every day and can be associated with other things.’

Tiredness is one example of this.

Extreme fatigue can be a result of the other symptoms such as when your body isn’t getting the right nutrients because of the reaction its having to gluten.

If you find that you have extreme tiredness, Coeliac UK recommends you contact your GP so that they can test your blood and whether gluten is causing these issues.

WHAT IS COELIAC DISEASE?

Coeliac disease is a genetic autoimmune disorder where the ingestion of gluten leads to damage in the small intestine.

It is estimated to affect one in 100 people worldwide.

One percent – or three million Americans – are living with coeliac disease.

There are more than 200 symptoms of coeliac disease but the more common ones are:

The only treatment for the disease and is a strict gluten-free diet.

Only foods and beverages with a gluten content less than 20 parts per million are allowed.

‘It’s an auto immune condition and causes tiny little blisters to develop. They occur mostly on the elbows and knees but can be anywhere,’ says McGough.

Both itchy and stinging at the same time DH responds to a gluten-free diet often by clearing up.

Diagnosis of DH is confirmed by a simple skin biopsy test and if you’re found positive you’ll be referred to a gut specialist.

5. Anaemia and vitamin B deficiencies

Coeliac disease damages the lining of your gut which can mean your body doesn’t properly absorb the vitamins and nutrients that it needs from the foods you eat.

Anaemia can occur when your body doesn’t absorb the right amount of iron in particular, which can lead to anaemia.

But while not everyone with anaemia will have coeliac disease, it can often be a key giveaway as can deficiencies in B vitamins.

While you would have to have a blood test to know whether or not you’re anaemic, signs to look out for are tiredness, shortness of breath, paleness and a tingling along with a crawling feeling in the legs.

McGough says: ‘Nutritional deficiencies such as in iron and vitamin B are due to gut damage which then results in malabsorption of nutrients from the food you eat.’

Neurological problems such as a condition called ataxia are another surprising symptom that your body simply can’t do gluten.

According to the NHS, ataxia is a term for a group of disorders that affect coordination, balance and speech and can result in problems with balance and walking, vision and even speaking and swallowing.

‘It’s an interesting area because neurological problems associated with coeliac disease highlight the wide range of manifestations and symptoms that can be triggered by gluten,’ said McGough.

Osteoporosis is a condition that weakens bones making them fragile and more likely to break.

It’s a common condition that according to the NHS affects over three million people in the UK and more than 500,000 people in this country receive hospital treatment for fragility fractures.

While for many people osteoporosis is not related to coeliac disease it can be a long-term complication of the disease if it goes untreate.

‘Once established on the gluten free diet and sticking strictly to it, that can make a huge difference to bone health and bone density,’ McGough asserts.

According to coeliac UK depression is another symptom of coeliac disease that it could be important not to ignore.

Experts are still uncertain about the exact relation of depression and the autoimmune disease.

McGough said: ‘If you’re unwell physically but you can’t put your finger on exactly what’s wrong and you’ve been back and forth to the doctor and they haven’t either then there is a potential for you to be feeling depressed.’

But while there are many individual studies highlighting the risk of depression for coeliacs, McGough asserted that there is still a lot of work to be done.

This is a symptom that might shock some people, and again McGough states that we are still not fully sure of the reasons for this association.

‘It’s certainly something that there should be awareness of,’ said McGough.

‘In the case of repeated miscarriages and problems with infertility that have been checked out then certainly it’s worth screening for coeliac disease.’

‘There are studies that indicate that in undiagnosed, untreated coeliac disease there is this link with infertility problems.

‘Therefore it’s certainly prudent to do a blood test for coeliac disease.’ 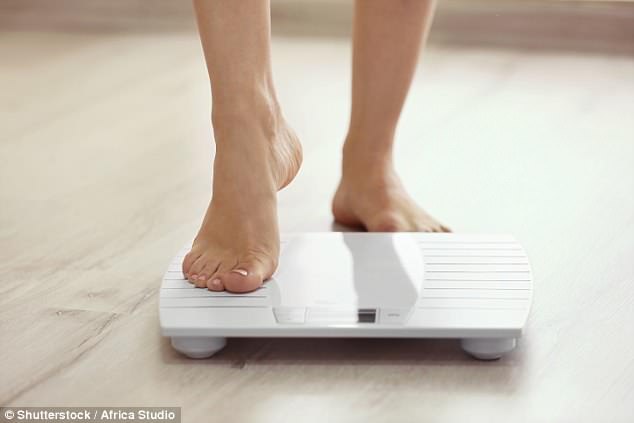 You might wonder how sudden weight loss can occur from a life-long condition but McGough explained that much like some of the other symptoms this is related to the autoimmune nature of this condition.

While the disease can be triggered in childhood, certain symptoms may not manifest until adulthood.

‘We used to think this was a disease of childhood and we didn’t realise that people were going through their lives with undiagnosed coeliac disease.

‘Today the peak diagnosis age is around 50.’

‘It’s possible that if you have undiagnosed coeliac disease and feel particularly stressed or had some other unrelated illness it might weaken your immune system and then exacerbate the symptoms.’

‘This could result in more malabsorption of nutrients in your gut and result in unexpected weight loss.‘

Autoimmune diseases can result in the loss of hair.

‘In undiagnosed coeliac, disease alopecia [the medical term for hair loss] might be something that occurs but it may just be patchy hair loss as opposed to significant loss.’

While it isn’t a symptom that is as typical as gut problems, mouth ulcers, anaemia and tiredness it is listed as something to be aware of on Coeliac UK’s website.

Again this symptom is a little rarer than most and is typically identified in children.

‘Tooth damage from undiagnosed coeliac disease a particular sort of discolouration and grooving of the enamel.‘

And while you might not be able to easily notice it in yourself it is something that your dentist would be able to identify.

‘Coeliac UK has had links trying to raise awareness of coeliac disease to health care professionals in order to try to address this,’ said McGough.

What do I do if I think I have coeliac disease?

‘The most important piece of advice I can give you is not to change your diet and see if it makes a difference,’ McGough says.

‘The screening test is the first step on the journey to diagnosis and you have to be on the gluten-containing diet when you have that test because otherwise, it’s a complete waste of time.’

Then to confirm your diagnosis you will be referred for an endoscopy which will determine whether or not you have the disease.

‘The gluten damages the lining of the gut and starts to cause the symptoms of coeliac disease.

‘When you have an endoscopy a tiny, tiny piece of the lining of the gut will be sampled and that can be analysed and the appearance of that can confirm diagnosis of coeliac disease.’

Coeliac UK has created a quiz that you can take to see if you might have coeliac disease. Click here to take the quiz.

This article originally appeared on Healthista and has been reproduced with their permission.