Revealed: The 5 brain-boosting reasons to take up martial arts!

We are all aware that exercise generally has many benefits, such as improving physical fitness and strength.

But what do we know about the effects of specific types of exercise?

Researchers have already shown that jogging can increase life expectancy, for example, while yoga makes us happy.

However, there is one activity that goes beyond enhancing physical and mental health.

In a piece for The Conversation, Ashleigh Johnstone, a researcher in cognitive neuroscience at Bangor University, explains how martial arts can boost your brain’s cognition too. 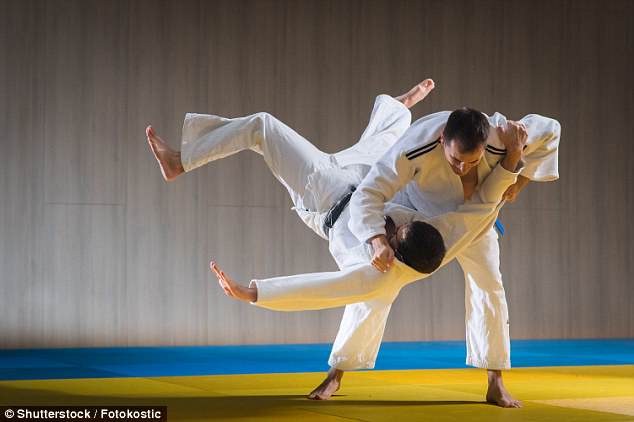 Ashleigh Johnstone, a researcher in cognitive neuroscience at Bangor University, explains how martial arts can boost your brain’s cognition

Researchers say that there are two ways to improve attention, through attention training (AT), and attention state training (AST).

AT is based on practising a specific skill and getting better at that skill, but not others – using a brain training video game, for example.

AST on the other hand is about getting into a specific state of mind that allows a stronger focus. This can be done by using exercise, meditation, or yoga, among other things.

It has been suggested that martial arts is a form of AST, and supporting this, recent research has shown a link between practice and improved alertness.

Backing this idea up further, another study showed that martial arts practice – specifically karate – is linked with better performance on a divided attention task.

This is an assignment in which the person has to keep two rules in mind and respond to signals based on whether they are auditory or visual.

In a US study, children aged 8-11 were tasked with traditional martial arts training that focused on respecting other people and defending themselves as part of an anti-bullying programme.

The children were also taught how to maintain a level of self-control in heated situations.

The researchers found that the martial arts training reduced the level of aggressive behaviour in boys, and found that they were more likely to step in and help someone who was being bullied than before they took part in the training.

Significant changes were not found in the girls’ behaviour, potentially because they showed much lower levels of physical aggression before the training than the boys did.

Interestingly, this anti-agression effect is not limited to young children. A different piece of research found reduced physical and verbal aggression, as well as hostility, in adolescents who practised martial arts too.

Some forms of martial arts, such as tai chi, place great emphasis on controlled breathing and meditation.

These were strongly linked in one study with reduced feelings of stress, as well as being better able to manage stress when it is present in young to middle-aged adults. There is a huge range of martial arts, some more gentle and meditative, others combative and physically intensive

WHEN DO HUMAN BRAINS BECOME ‘OLD’?

Cerebrospinal fluid (CSF), which is found in the brain and spinal cord, changes its speed of movement in people older than their mid-20s, a Lancaster University study found.

These movements are linked to breathing and heart rates, with CSF changes previously being associated with conditions such as multiple sclerosis and high blood pressure.

It is unclear if these CSF changes are associated with brain disorders that typically affect the elderly, such as dementia.

Previous research suggests the volume and weight of the brain begins to decline by around five per cent per decade when a person reaches 40 years old.

On the back of these findings, study author Professor Aneta Stefanovska added further research ‘may open up new frontiers in the understanding and diagnosis of various neurodegenerative and ageing-related diseases to improve diagnostic procedures and patient prognosis.’

The discovery came to light during the development of a new method of investigating brain function, which has revealed the stage in life when the brain starts to deteriorate.

Previous research carried out by Imperial College London suggests brains’ grey matter, which enables the organ to function, shrinks during middle age and is related to cell death.

White matter, which enables communication between nerve clusters, also appears to decline at around 40.

This is also when the deterioration of myelin sheath occurs. Myelin sheath is a fatty substances that surrounds nerve cells and ensures proper function of the nervous system.

These changes are thought to occur due to a reduction in the hormones dopamine and serotonin.

This effect has also been found in older adults – the 330 participants in this research had a mean age of 73 – too. And the softer, flowing movements make it an ideal, low-impact exercise for older people.

In the study above, 45 older adults (aged 67-93) were asked to take part in karate training, cognitive training, or non-martial arts physical training for three to six months.

The older adults in the karate training showed lower levels of depression after the training period than both other groups, perhaps due to its meditative aspect.

It was also reported that these adults showed a greater level of self-esteem after the training too.

After comparing a sedentary control group to a group of people doing karate, Italian researchers found that taking part in karate can improve a person’s working memory.

They used a test that involved recalling and repeating a series of numbers, both in the correct order and backwards, which increased in difficulty until the participant was unable to continue.

The karate group were much better at this task than the control group, meaning they could recall longer series of numbers.

Evidently, there is far more to martial arts than its traditional roles. Though they have been practised for self-defence and spiritual development for many hundreds of years, only relatively recently have researchers had the methods to assess the true extent of how this practice affects the brain.

There are a such a huge range of martial arts, some more gentle and meditative, others combative and physically intensive.

But this only means that there is a type for everyone, so why not give it a go and see how you can boost your own brain using the ancient practices of martial arts.