Astonishing images show a boy, 10, undergoing a nine-hour heart transplant: Life-saving organ was donated by a nine-year-old girl who tragically died in a car crash

Surrounded by a team of surgeons and hooked up to machines which are keeping him alive, these incredible pictures show the moment a nine year-old boy’s heart is removed and replaced during a transplant operation.

In a UK first, camera crews were allowed to film the incredibly complex procedure and footage shows the moment the donor heart starts beating again.

Max suffers from cardiomyopathy, a disease of the heart muscle that affects its size, shape and structure, and spent seven months hooked up to a pump which was keeping him alive.

A transplant was his only hope and a ‘perfect match’ arrived at the Freeman Hospital in Newcastle, one of Europe’s leading multi-organ transplant centres, in August.

It was from a nine year-old girl, Keira Ball, who had been killed in a car crash. 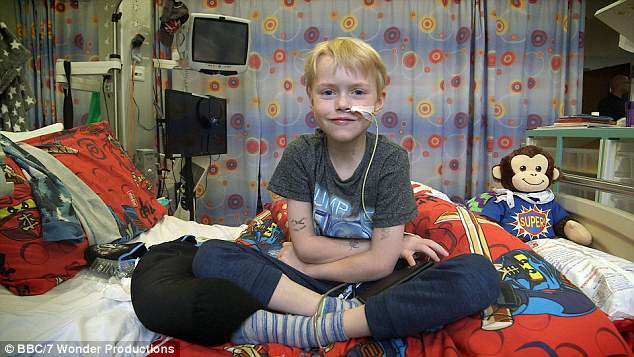 Schoolboy Max Johnson, who had cardiomyopathy, spent seven months waiting for a donor heart before undergoing a nine-hour operation (thought to be pictured recovering in hospital) 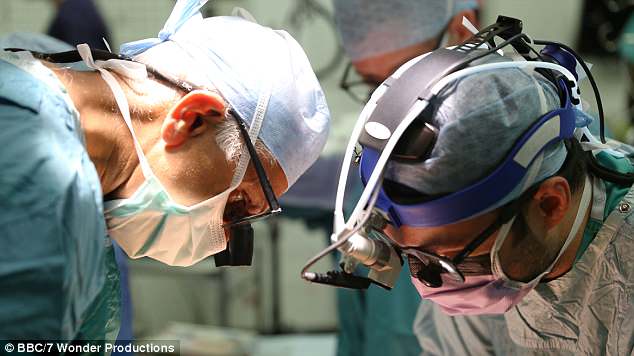 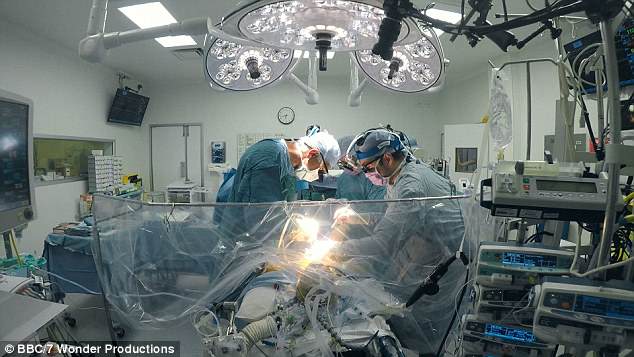 Surgeons had just four hours to place the donated heart into Max’s body. The organ was donated from nine-year-old Keira Ball who tragically died in a car crash last August 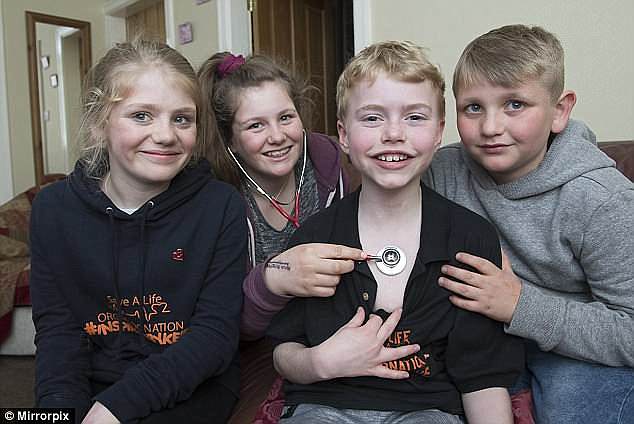 Max’s swollen heart was the size of a rugby ball

In the BBC documentary, viewers see the most complete picture of the process of organ donation ever shown on television.

His mother Emma, 47, who was in theatre for the start of the operation, recalled how the donor organ ‘could not wait to start beating’ once it was put inside her son.

‘The surgeons were talking to it and said “you are waking up too soon, little one”, she said.

In the programme Max’s severely damaged organ – bloated to the size of a rugby ball – is shown ‘cemented’ to his chest cavity by damaged tissue.

Surgeon Asif Hasan removes the organ, telling theatre staff: ‘Throw it in the bin.’ Max’s chest can be seen cut open, without his heart inside as he is kept alive by machines.

Footage also shows the donor heart’s journey from when it arrives at the front door of the hospital and is wheeled into theatre in a plastic box. 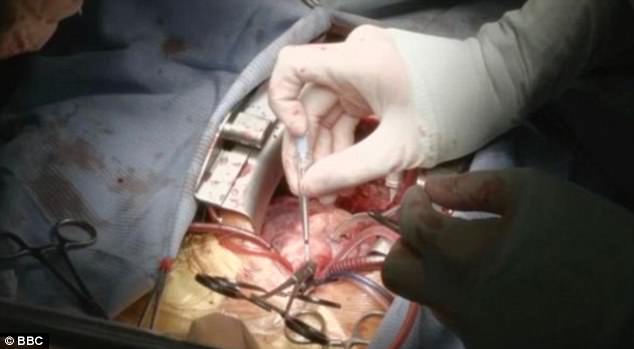 It takes 40 minutes to ‘plumb’ the organ into Max, who is kept alive via a bypass machine 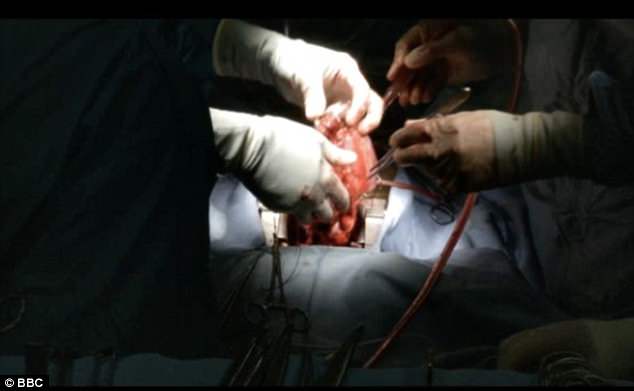 After three hours and 10 minutes ‘on ice’, doctors confirmed the heart was working normally 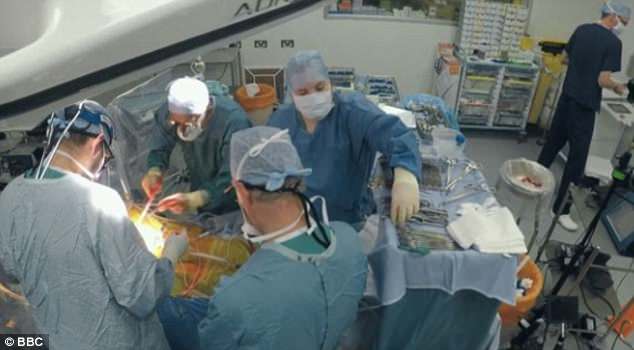 In a UK first, camera crews were allowed to film the incredibly complex procedure 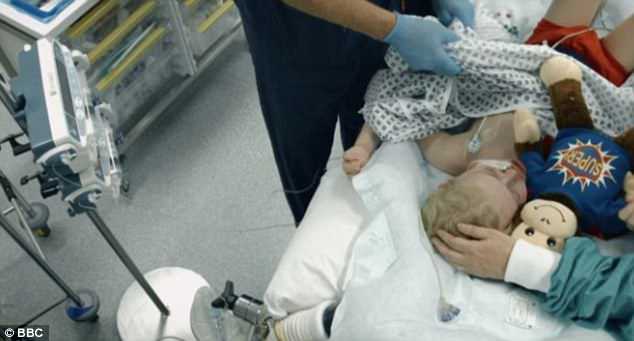 Max had a serious heart disease, with the donated, matched organ being his ‘only hope’

Cardiomyopathy is a disease of the heart muscle that affects its size, shape and structure.

The condition is usually inherited.

The three main types of cardiomyopathy are:

All of these types of cardiomyopathy affect the heart’s ability to pump blood around the body efficiently.

They can also impact the way electrical signals make the organ beat.

There is no cure, however, in most cases people’s quality or length of life is unaffected.

Therapies may include medication, treatment to normalise heart rhythm, pacemakers and, in rare cases, heart surgery or transplants.

The donated heart had travelled 400 miles from a hospital in Devon and surgeons had just four hours to put it in place.

At one point, Mr Hasan calls out: ‘Not ready yet.’ It then takes 40 minutes to ‘plumb’ the donated organ into Max’s body, while the bypass machine keeps him alive.

The new heart is then ‘brought back to life’ with oxygen and a small electric current.

Mr Hasan watches for the first 10 to 15 minutes to ensure there are no problems as Max’s blood is pumped around his body.

‘It is starting to beat now,’ Mr Hasan said, as monitors confirm that after three hours and 10 minutes ‘on ice’ the heart is working normally.

Keira had suffered serious head injuries in a car crash near her home in Barnstaple, Devon at the end of July.

Her mother Loanna was left fighting for life.

Three days after the accident, doctors told Keira’s father Joe there was nothing more they could do and he took the decision to allow her to become an organ donor.

Earlier this month, Mr and Mrs Ball and Keira’s sisters Keely, 13, Katelyn, 12, and brother Bradley, eight, travelled to Cheshire to meet Max and listened to her heart beating inside him.

In the emotional first meeting, Mr Ball, 35, wiped away tears and embraced Max, now 10, after holding a stethoscope to his heart.

Max, who had been at risk of ‘imminent death’ after 196 days on a transplant waiting list, told Mr Ball: ‘I cannot thank you enough.

‘Words aren’t enough. It is special to be able to say thank you in person.’ Mrs Johnson told the Ball family: ‘When the call came to say the heart was there, you are happy for your own child, but devastated for the donor family.

‘There are such conflicting emotions. We thought of you at Christmas, and we will think of you when the anniversary of the operation comes around.’

It is rare for a donor family to meet the recipient, but Mr Johnson hopes that will change after their meeting with the Balls. 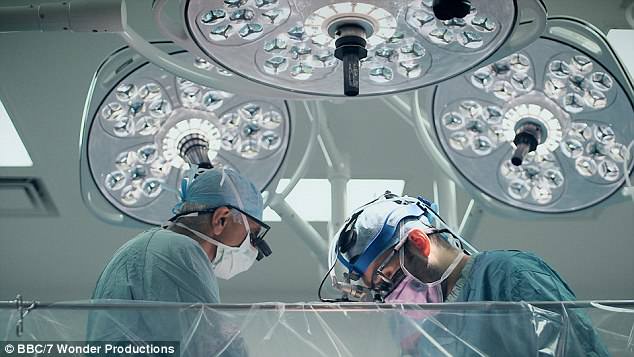 Using a process called ex vivo perfusion, surgeons can reanimate organs, medicate them and keep them alive outside the body, for longer while they are transported to the recipient patient 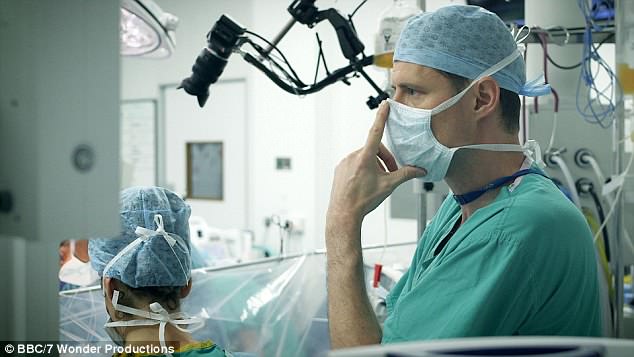 WHAT IS EX VIVO PERFUSION?

Usually performed on lungs,  ex vivo perfusion is an experimental technique that rejuvenates poor-quality organs in order to make them fit for transplantation.

It involves keeping organs ‘active’ outside of the body by providing them with warmth, nutrients and blood substitutes.

This replicates the condition organs are in when inside people’s bodies.

Such a technique may lead to less donor organs being wasted and recipients’ waiting times being reduced, which could save lives.

Keira’s organs saved four lives, including that of another little boy who received her pancreas and liver.

Her parents have set up a charity in her memory called Inspired By Keira, which helps other parents who have lost children while Max has been the face of a campaign to change the law on organ donation to an opt-out system.

In this country, there is a chronic shortage of suitable organs being donated for transplant.

Britain has amongst the worst rates of family consent for donation in Europe.

But surgeons featuring in the BBC documentary believe they have made the pivotal breakthrough.

Using a process called ex vivo perfusion, they can now reanimate organs, medicate them and keep them alive outside the body, for longer whilst they are transported to the recipient patient.

This allows organs to be sourced from much further afield. It also means doctors have much more time to assess an organ’s function, removing the risk of an organ failing post-transplant.

MPs have also voted in favour of replacing the current system of organ donation with an opt-out scheme, in which everyone is considered a donor unless they specifically say otherwise.

It is hoped the new legislation will be called Max’s Law once it is in place.