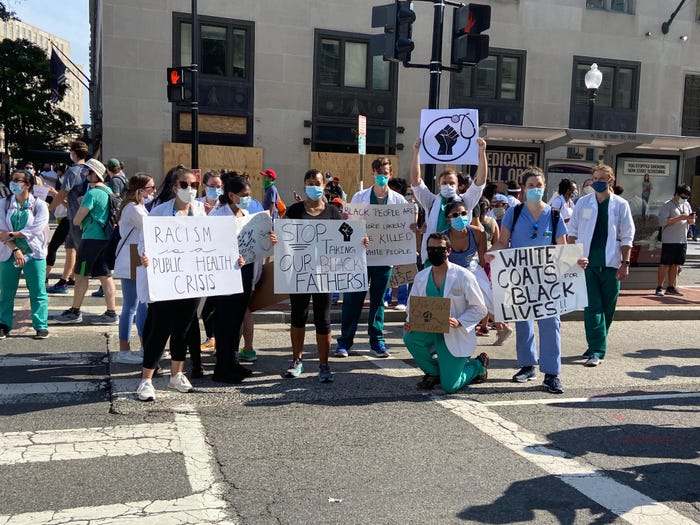 First-year students at University of Pittsburgh School of Medicine recited two oaths at the start of the fall semester: the traditional Hippocratic Oath and a brand-new Oath of Professionalism.

"We start our medical journey amidst the COVID-19 pandemic, and a national civil rights movement reinvigorated by the killings of Breonna Taylor, George Floyd and Ahmaud Arbery," begins the new oath, written by and for the class of 2024. "We honor the 700,000+ lives lost to COVID-19, despite the sacrifices of health care workers."

Many US medical schools have penned their own versions of the Hippocratic Oath, a vow taken by physicians to treat patients to the best of their ability and uphold ethical standards that dates back to the fifth century B.C.. This also isn't the first time a school has turned to its students for input.

But, per NPR, this oath stands out because it directly references events that are still unfolding, even months after it was written.

The new oath recognizes the coronavirus pandemic and racial disparities in the healthcare system. It also expresses a commitment to diversity and allyship, as well as fighting health misinformation.

The University of Pittsburgh School of Medicine invited students to write a class oath to "acknowledge their ever-evolving responsibilities as physicians," according to a Pittwire press release. The new tradition will be passed on to future Pitt Med classes.

Students on the oath-writing committee spent 80 hours creating the pledge during orientation week before presenting it to the dean of medicine.

"We worked collaboratively but disagreed at times," first-year medical student Tito Onyekweli said in the press release. "We brought up topics that were triggering for some but did not push the status quo enough for others. We were diverse in the most collective sense. More than anything, this oath-writing process was human."

Sarah Rodriguez, a professor of global health studies and bioethics at Northwestern University, said the oath drew upon historical principles of medical ethics while also recognizing the role medicine has played in discrimination throughout history.

Medical societies are also speaking up about race and social justice

This new oath comes at a time when the medical profession as a whole is speaking up about political and social issues that affect health.

Doctors, nurses, and medical students protested racial injustice throughout the summer, forming an organization of White Coats for Black Lives.

In July, The New England Journal of Medicine published an editorial on "Diagnosing and Treating Systemic Racism," which addressed doctors' own racial biases and the structural factors that affect the health of marginalized people.

The oath touches on similar themes, like establishing trust in the communities they serve and learning about the socioeconomic factors that affect health.

"It is significant in that it recognizes not just the importance of the social determinants of health to clinical care, but also, that it necessitates physicians take advocacy actions to ensure equitable access to health care," Rodriguez wrote in an email to Insider.