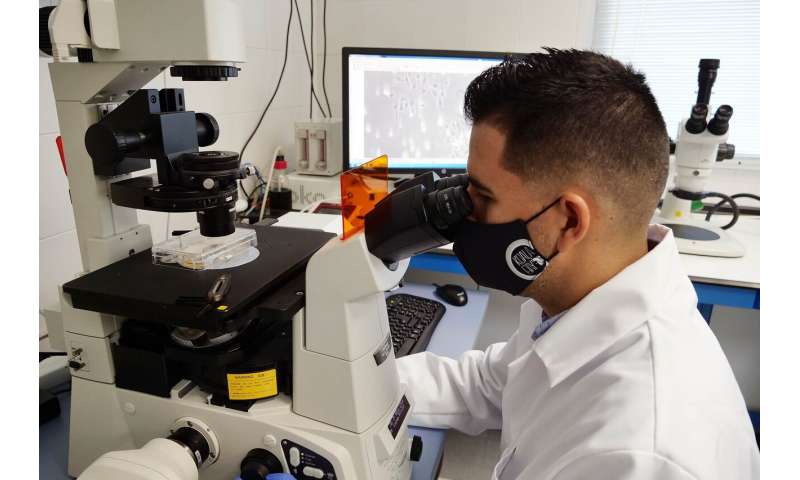 The loss of oligodendrocytes (OLs), highly specialized cells of the brain that produce myelin, is a frequent condition in patients suffering neurodegenerative diseases. Myelin is an essential structure that insulates nerve cell axons for effective impulse transmission.

Researchers of the Department of Cellular Biology, Genetics and Physiology of the University of Malaga (UMA) have succeeded in generating human OLs from pluripotent stem cells derived from patients with nervous system diseases, specifically multiple sclerosis or ALS.

This method is faster and more efficient, because it enables the generation of OLs in just three weeks. This find is highlighted on the November cover of the scientific journal Nature Protocols.

“So far, no one has developed any treatment that reverts the loss of myelin and OLs in these patients, probably because there hasn’t been an appropriate platform available to study these phenomena,” says UMA researcher Juan Antonio García-León, main author of this study.

According to García-León, the generated cells are the equivalent of the OLs in a human brain and produced myelin around neurons when transplanted into the brain of an animal model.

García-León explains that these cells could be used to find efficient treatments that favor myelination. One biotechnology company is already using this new method to develop an efficient drug to revert myelin loss involved in multiple sclerosis, something crucial to counteract its symptoms and pathologies.

Although studies on the alteration of OLs and myelin in patients with neurological diseases such as Alzheimer’s disease or schizophrenia are still limited, some recent studies argue its fundamental role in these conditions.