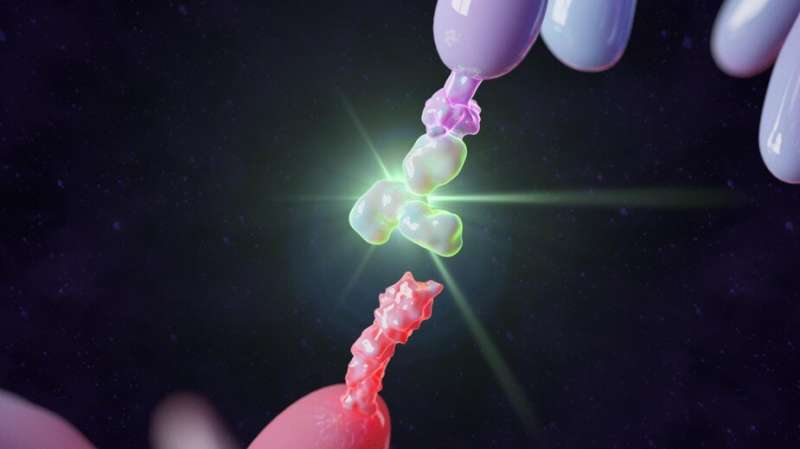 Immunotherapy drugs are promising new weapons in the fight against cancer, but they are so strong that they can be toxic to the rest of the human body. The basic idea behind immunotherapy drugs is simple. Doctors inject special kinds of drugs, especially proteins such as antibodies and cytokines prepared or modified in a lab, into a patient, where they activate the patient’s immune cells—T-cells, NK cells, and so on—and help these cells fight the tumor. In short, immunotherapy drugs work like a powerful cocktail that boosts a patient’s own immune system.

“After being prescribed by a doctor, immunotherapy drugs are administered intravenously,” says Li Tang, head of the Laboratory of Biomaterials for Immunoengineering at EPFL’s School of Engineering. “Once inside the body, the drugs spread all over—not just where the tumor or any metastases are located. The problem is that the proteins in the drugs are so strong that they damage healthy tissue.” Many of the immunotherapy treatments already out there have proven to be highly effective against cancer in preclinical studies. But they often can’t be used to save people because they’re too toxic to the rest of the body. “The treatments that are used in patients today have been toned down so they’re less potent,” says Tang. “That makes them safer, but also less effective at destroying tumors. Our aim is to keep all the potency of immunotherapy, because it will be an important treatment option for cancer patients.”

Tang and his team therefore developed a method whereby the immunotherapy proteins are activated only when they come into the tumor tissues. The EPFL team is one of the pioneers to develop this kind of technology through a universal chemical approach. “We were able to achieve this thanks to our cross-disciplinary approach,” says Tang. “Our method draws on techniques from both chemistry and immune engineering.” The research has just been published in Science Advances.

Yu Zhao, a postdoc at Tang’s lab, began by utilizing the chemical properties around tumors. “The tumor microenvironment is different from the rest of the body. The pH is lower, meaning it’s more acidic, and it has a high reducing potential,” he says. Zhao used these facts, already known to scientists, to develop a kind of polymer shield for the protein drugs that would let them travel harmlessly through the body until they reach the tumor.