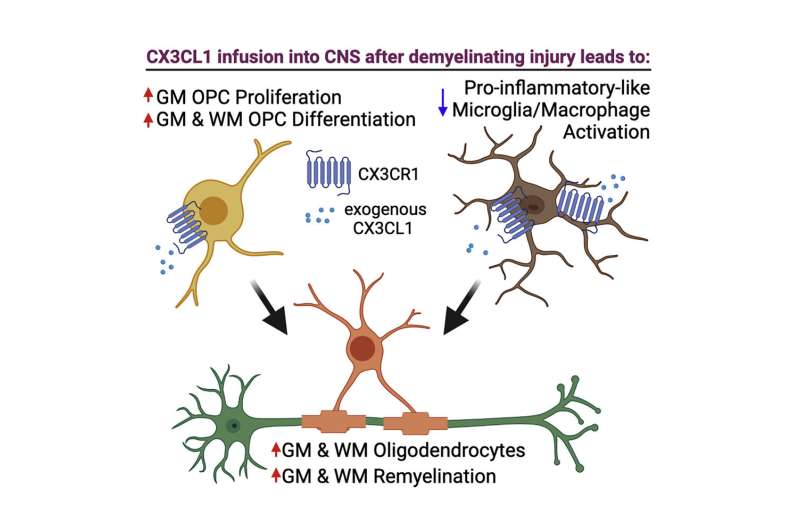 A University of Alberta researcher is one step closer to demonstrating the potential of a brain molecule called fractalkine to halt and even reverse the effects of multiple sclerosis and other neurodegenerative diseases.

Multiple sclerosis is an autoimmune disease in which the myelin, or fatty lining of nerve cells, is eroded, leading to nerve damage and slower signaling between the brain and the body. MS symptoms range from blurred vision to complete paralysis, and while there are treatments, the causes are not fully understood and nothing exists to reverse the disease process. More than 90,000 Canadians live with MS, according to the MS Society.

She found the treatment increased the number of new oligodendrocytes—vital brain and spinal cord cells that produce myelin in both embryonic and adult brains—which are damaged during the MS autoimmune attack.

“If we can replace those lost or damaged oligodendrocytes, then they could make new myelin and it is believed that would halt the disease progression, or maybe even reverse some of the symptoms,” Voronova says. “That’s the Holy Grail in the research community and something that we’re very passionate about.”

Hoping to meet an unmet need

Voronova’s earlier research tested the safety and efficacy of fractalkine in normal mice and found similar beneficial effects. Other researchers have demonstrated that fractalkine may provide protection for nerves in mouse models before the disease is induced, but this is the first time it has been tested on animals that already have the disease.

“What was important to us is to approximate it to the clinic,” Voronova points out. “When a person with MS is diagnosed, the injury has already occurred, there’s some kind of attack that has already happened on the oligodendrocytes and myelin.”

Voronova and her team observed new oligodendrocytes, as well as reactivated progenitor cells that can regenerate oligodendrocytes, in the brains of the treated animals. Remyelination occurred in both the white and gray matter. The researchers also observed a reduction in inflammation, part of the damage caused by the immune system.

Next steps for the treatment include testing it in other diseased mouse models, including those with neurodegenerative diseases other than MS. Voronova is working with colleagues at the U of A to search for ways to easily deliver fractalkine to the brain, such as through a nasal spray. Voronova is a developmental and stem cell biologist by training, so she also hopes to test and develop other brain molecules that she originally discovered while doing basic research on the embryonic brain.