I place a white teacup with a faded gold rim on a stand in front of me and lift a battered steel baseball bat in my arms, ready to swing.

But, then, I hesitate. I’ve never broken anything on purpose before and, although I’m here to do just that, it still feels kind of wrong. 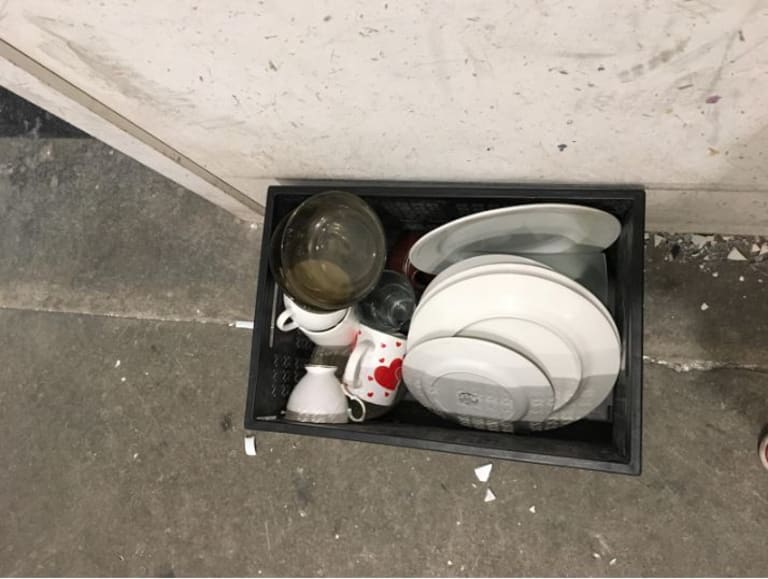 Objects given to attendees at The Break Room.

I’m at The Break Room in Melbourne’s inner suburbs. Part of a growing trend, it’s a place where you can vent your anger in the form of breaking stuff.

While there are hordes of them in America, such places have only recently opened in Melbourne and the Sunshine Coast (The Smash Pit), and a new one has recently popped up in Sydney (Smash Brothers). Prices vary, but a ten-minute session will set you back around $40.

Upon arrival, I sign a waiver and get decked out in protective gear: white button-up overalls, a pink face shield (the choices are pink or green) and black biker gloves. I’m then led into a room and presented with a crate of breakables (think crockery, electricals and the like).

The desire to break things is proving popular. When Hunter opened his doors in 2016, he had “four or five” people coming by every other day. Nowadays, he estimates around 100 or so people come in each week.

Those people come from all walks of life, says Hunter, although 70 per cent are female, usually aged 20-35. Most are newbies, but he has some regulars (they’re usually “buttoned up” people with a stressful job, unable to find a place to let loose, or those going through a rough time, such as a divorce, looking to vent).

“In a world where we have to be pretty sanitised and ‘on’ all the time… [break rooms] give people that permission to be a little bit loud, sweaty and dirty,” he says.

They also allow people to express their feelings physically.

“So it doesn’t just manifest in them eating or drinking their feelings away."

While he touts sessions as “therapeutic”, Hunter says he doesn’t refer to them as “therapy”.

She says it harks back to the old days where, when faced with a threat that got your blood pumping, humans were forced to fight, or flee.

“Physical energy would have been expelled to get back to a balanced state,” she explains.

Blowing off steam in a rage room has the same effect, she says, just “in a socially acceptable manner”.

Dr Lishman is not worried rage rooms will lead to real-life violence ("just because we do something for fun doesn’t mean we’re going to do it in an inappropriate way in the future”). Besides, she says, keeping anger “pent up” is not good for us psychologically or physically.

Mind you, if you’re constantly seeking physical ways to release anger, Dr Lishman says it's time to see a psychologist.

However, for those merely harbouring a desire to throw a plate in rage, rage rooms take away the “guilt” of destruction, says Hunter. You can go as wild as you like and simply walk away afterwards, not worrying about the mess.

But I do feel guilty. About wastage, that is. Hunter says I’m not alone.

“If I was buying things brand new then absolutely, it’d be the epitome of Western wastefulness – but I’m not. I’m buying stuff from op shops, so this stuff’s already had a billion uses… The money goes to a great cause, we get to break all the weird shit; everyone wins.”

The waste afterwards is “more of a problem”, he concedes. The Break Room produces two tonnes of it a month. He tries to come up with creative ways to deal with it, such as reusing it in artwork or jewellery.

As my bat strikes the teacup, I watch in fascination as it shatters. I try to channel anger during my session, but am unable to summon any.

That’s okay, says Hunter, who explains rage rooms are also popular on date nights and corporate building sessions. He likens them to skydiving, saying people don’t necessarily jump out of planes because they love “vertical velocity”, rather they’re seeking the adrenaline rush of a new experience.

And it is adrenaline-inducing: the thumping heavy metal music, the physicality of swinging a bat and hurling plates, all while dressed in something I could picture Walter White from Breaking Bad wearing.

It’s cathartic, too. As I step into the watery winter sunshine afterwards, I’m sweaty and my limbs are buzzing from exertion, but I’m also awash with an unexpected feeling of calm.

I get why these places are all the rage.