A brisk 20 minute daily walk can slash heart failure risk by up to a quarter in middle age in just six years, study finds

A brisk 20 minute walk a day slashes the risk of developing heart failure in middle age by nearly a third, new research claims.

Getting off the sofa and going for a walk or a bike ride for the recommended two-and-a-half hours a week can reduce the risk of the chronic illness in just six years.

But failing to do any exercise or stopping after leading a previously active life can increase the chance of getting the devastating condition.

Researchers from Johns Hopkins University in Baltimore said the findings suggested it may never be too late to reduce the risk of heart failure with moderate exercise.

Even those who progress from no exercise to consistently doing the recommended amount within six years cut their risk by nearly a quarter.

The study follows a survey by Public Health England last year that found 41 per cent of 40 to 60 year-olds – around 6.3 million people – don’t manage a brisk ten-minute walk even once a month. 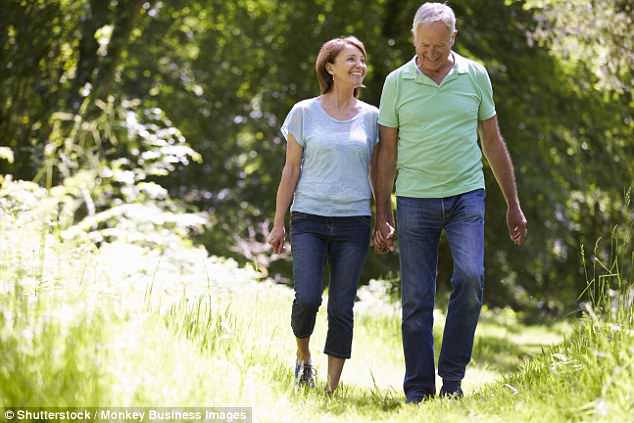 Leading cause of hospitalisation, but easy to cut risk

Heart failure affects about 900,000 Britons and up to 6 million Americans.

It happens when the heart is unable to pump blood properly due to weakness or stiffness, reducing the body’s oxygen.

It is the leading cause of hospitalisation in those over 65. Risk factors include high cholesterol, diabetes, smoking and a family history of the condition.

Senior author Professor Chiadi Ndumele said: ‘In everyday terms our findings suggest consistently participating in the recommended 150 minutes of moderate to vigorous activity each week – such as brisk walking or biking – in middle age may be enough to reduce your heart failure risk by 31 per cent.

‘Additionally, going from no exercise to recommended activity levels over six years in middle age may reduce heart failure risk by 23 per cent.’

Number of patients is growing, and there aren’t specific drugs

Last year a UK study found men and women living with heart failure have a higher risk of death than those with the most common cancers.

‘This is because people are living longer and surviving heart attacks and other forms of heart disease.

‘Unlike other heart disease risk factors like high blood pressure or high cholesterol, we don’t have specifically effective drugs to prevent heart failure.

WHAT IS HEART FAILURE?

Heart failure happens when the heart is unable to properly pump blood around the body, and usually happens because the heart is too weak or stiff.

It is a long-term condition that can’t be cured, but symptoms can be controlled.

Heart failure usually affects older people but anyone can get it; it tends to get worse over time and is likely to eventually be fatal.

Symptoms of heart failure include breathlessness, tiredness, swollen ankles and legs and, less commonly, dizziness, a fast heart rate and a persistent cough.

Treatment may include lifestyle changes such as giving up smoking and drinking, eating healthily and exercising; medication; or surgery.

‘So we need to identify and verify effective strategies for prevention and emphasise these to the public.’

But little was known about the impact of changes in exercise levels over time.

Now it has been shown exercising in middle age – even after leading a sedentary existence – decreases the risk.

But being active before slowing up increases it.

Participants were recruited from 1987 to 1989 in North Carolina, Mississippi, Minnesota and Maryland and had an average age of 60.

They were monitored annually for an average of 19 years for heart attack, stroke and heart failure using telephone interviews, hospital records and death certificates.

Over the course of the study there were 1,693 hospitalisations and 57 deaths due to heart failure.

At the first and third visits – six years apart – each participant filled out a questionnaire about physical activity levels.

People’s activity level was rated as poor, intermediate or ‘recommended’ in line with guidelines issued by the American Heart Association.

The latter is at least 75 minutes of vigorous exercise or 150 minutes of moderate exercise each week. Over four in ten (42 per cent) said they performed this.

Some 23 per cent of people were in the intermediate bracket, in which they still exercised but did not meet the recommended amount.

Just over a third (35 per cent) managed no exercise at all, placing them in the poor category.

Risk of heart failure is reduced in everyone who exercises

People who get the recommended amount of exercise have a 31 per cent lower risk of heart failure after six years when compared to people who do no exercise.

Heart failure risk falls by about 12 per cent among people who start exercise after doing none, and among those who increase their activity level from intermediate to the recommended amount.

On the other hand, heart failure risk increases by 18 per cent in people who become less active, when compared to those who continue to exercise.

According to the American Heart Association, fewer than 50 per cent of Americans get recommended activity levels.

The study was published in the journal Circulation.