Home » Health News » As I head for a second birth, I wonder if the rise of the caesar is so bad?

“What if it’s a shipwreck down there afterwards when you could just zip her out?” my partner asked. “Besides,” he added, “our daughter is perfect.”

“Seriously?” I replied, thinking of that infantile, but popular, one-liner some men make about childbirth being like watching their favourite pub burn down. 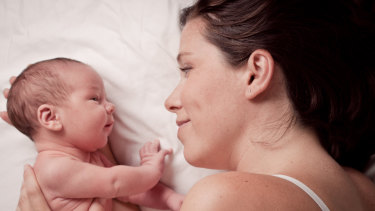 However they give birth, women deserve to make their own choice, free of judgment.Credit:Getty

We were discussing me having a natural birth for our second daughter following an emergency caesarean for our first.

Having had all my visualisations of a smooth, drug and drama-free delivery totalled the first time around, I’ll admit there are fears approaching a second.

Though it's not the path I'm planning, booking in for an elective caesar would be the easy option. And it’s an option more Australian women are taking.

Last week, the NSW Mothers and Babies report revealed more women are giving birth via caesarean section than ever before as the rate of vaginal births drops to a record low, accounting for just over half (53.6 per cent) of all births.

While there are numerous reasons for the 18.5 million caesarean sections that are carried out annually around the world, given the choice humans typically prefer being in control to surrendering to the messy unpredictability of life. And the experience of childbirth is arguably life at its messiest and most unpredictable, if also its mightiest and most empowering.

So you take the desire for control and add it to a range of reasons including the belief that c-sections are painless or somehow safer; a previous bad experience with a vaginal birth; their own or their partner’s fears about “shipwrecked” bodies and the impact to their sex life after baby; or advice from friends or obstetricians.

Advice from my own friends has been mixed.

One, who has had a “normal” birth following a c-section, admitted her vagina had “never been the same” after her second child and she wished she had just elected for a second caesar instead of “trying to prove something”.

Another, who has three children, all of whom she had naturally but with complications during each, said there was a point she felt angry with herself during her third labour for pushing herself to do something she felt she “wasn’t cut out” for, though she insisted that her vagina had ”bounced back” just fine.

Yet another friend, who has had two “normal” uncomplicated births encouraged me to try for a natural birth for its symbolism in “trusting the body [and] letting go of a traumatic birth story”. Besides, she added, it means less medical intervention and drugs and is “as nature intended it”.

Dr Vijay Roach is the president of the Royal Australian and New Zealand College of Obstetricians and Gynaecologists.

His view is that the rising rates of c-sections are not problematic, they are simply reflective of the demographics of new mothers – older, more likely to be overweight or obese and more likely to have gestational diabetes – as well as a more risk-averse society.

According to Roach women’s expectations of birth are also changing and there is more awareness about the risks to their own body; the potential damage to the vagina, the bladder or the bowel.

“The truth is an elective caesarean-section is an incredibly low-risk procedure. We’ve been trying to avoid that fact … and because it isn’t the natural way to do things, [we say] caesarean section is bad,” Roach says. “If you start with that premise you’re always trying to find reasons why caesarean section rates shouldn’t increase.”

Among the risks of caesarean sections are infection, pain, a greater likelihood of having a repeat caesarean for the next birth, a greater likelihood of the baby experiencing respiratory distress (a risk Roach says can be reduced by having the procedure after 39 weeks) and the increased incidence of a condition called placenta accreta where the placenta gets stuck and can lead to severe blood loss.

Among the risks of vaginal birth are damage to the genital tract, bladder and bowel and, at least in Royal North Shore Hospital, where Roach works, a higher incidence of blood transfusions required after the birth.

Vaginal births generally lead to faster recoveries, though Roach says women who have caesarean  section “are often up and about the next day”.

“The language we use ‘oh it’s a major operation’, well, if you have a complicated vaginal birth or an instrumental vaginal birth, that’s a pretty major procedure as well.”

Dr Megan Cooper, a midwifery adviser from the Australian College of Midwives, has a different perspective.

“While caesarean sections are indicated in some situations to ensure the health and wellbeing of the woman, baby or both, caesarean sections come with a great deal of risk,” Cooper says, adding it’s not only the short-term outcomes but the increased longer-term risk of developing allergies and asthma.

She adds: “We now understand that birth by c-section alters the baby’s microbiome which in turn affects their immune system and therefore, their risk of infections.”

Roach says it is correct that babies born vaginally have a higher exposure to the microbiome, but adds, “I don’t think we have evidence that that makes a significant difference to long-term outcomes.”

One point they agree on is that the only choice women "should" make is their own.

“Women and partners require full disclosure of all information that is evidence-based and free from bias,” Cooper says.

Roach adds the decision “shouldn’t be” based on the opinion of academics, midwives, obstetricians or the wider society.

“It’s actually that individual woman’s right to be fully informed of the potential risks of any process and then the woman making a decision. Women should be equally supported in having pregnancy care and the birth that they choose to have.

“I think that’s the message that gets lost. Everyone talks about what women 'should' do rather than saying to the woman ‘what would you like to do?’ or ‘what’s important to you?’ or ‘what do you value?’”